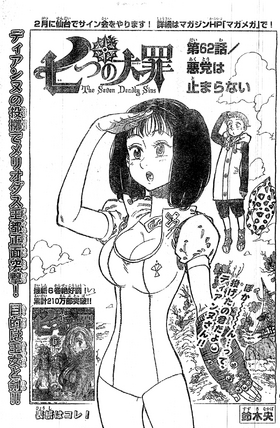 The Devil Won't Stop「悪党は止まらない Akutō Wa Tomaranai」 is the 62nd chapter of the manga, Nanatsu no Taizai.

Meliodas, Ban and Gowther continue to travel at extreme speeds, eventually landing right outside the kingdom. Noticing their arrival, Dreyfus and Hendrickson decide to postpone their fight and argument to deal with the sins, ordering a legion of Holy Knights to stop the invasion. Upon encountering the Deadly Sins, the knights simultaneously releases a sequence of attacks, but Meliodas easily uses Full Counter and reflects all of the attacks. Suddenly, King Arthur Pendragon, accompanied by a mysterious hooded person, arrives from Camelot on the other side of the kingdom with a huge army.

Retrieved from "https://nanatsu-no-taizai.fandom.com/wiki/Chapter_62?oldid=127357"
Community content is available under CC-BY-SA unless otherwise noted.