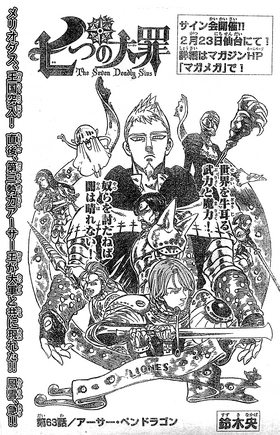 Hendrickson decides to head towards the southern gate to meet Arthur, who seeks audience with the king. The Camelot army is revealed to be just an illusion caused by the mysterious figure next to Arthur. After Hendrickson refuses to let Arthur see the king, he assumes Hendrickson has encounter some problems and offers to help. Taking off his helmet, he reveals that a very youthful appearance. Meanwhile, Elizabeth and Hawk discovers themselves to be inside a dungeon located within the Kingdom of Liones. She proceeds to search for her family, and eventually finds Margaret. At the other side, Dreyfus orders Gilthunder, Howzer, Guila and Jericho to prepare to fight the Seven Deadly Sins.

Retrieved from "https://nanatsu-no-taizai.fandom.com/wiki/Chapter_63?oldid=127562"
Community content is available under CC-BY-SA unless otherwise noted.