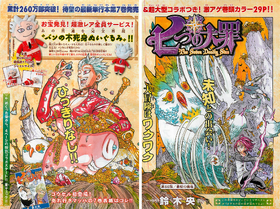 First Sacrifice「最初の犠牲 Saisho no Gisei」 is the 66th chapter of the manga, Nanatsu no Taizai.

After discovering Diane in the basement of the Hendrickson's research building, Dreyfus immediately questions her goal. Without hesitating, the Deadly Sin demands to have Elizabeth returned, leaving the Great Holy Knight only confused. Howzer becomes more and more nervous, and Jericho decides to deliver the first attack. Diane straightaway swings Gideon, destroying part of the building and blasting Jericho away. Gilthunder then proceeds to begin attacking, and under Dreyfus' commands, Howzer reluctantly enters the battle as well. However, despite using a combined technique, Diane was able to fend off the technique by using Ground Glagius. Meanwhile, Meliodas, Ban and Gowther notices the trouble, so the Sin of Lust volunteers to survey the situation. Diane attempts to unleash Ground Glagius for a second time, but Dreyfus easily blocks it and uses his ability Break to pierce through her chest.

Last Page of Chapter 66
Add a photo to this gallery

Retrieved from "https://nanatsu-no-taizai.fandom.com/wiki/Chapter_66?oldid=128784"
Community content is available under CC-BY-SA unless otherwise noted.