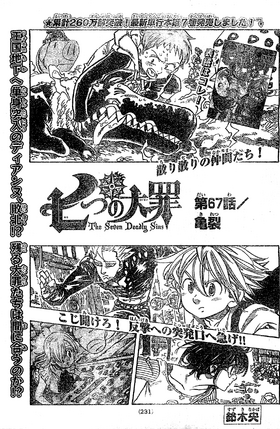 Crack「亀裂 Kiretsu」 is the 67th chapter of the manga, Nanatsu no Taizai.

After being heavily damaged by Dreyfus' Break ability, Diane briefly collapses on the floor whilst coughing out blood. Helbram returns to the group of Holy Knights after evading Diane's Ground Glagius by sacrificing some of his subordinates. Diane attempts to move again, but is easily sent flying away to the city by the Great Holy Knight's technique, Pulverize. When she crashes into the buildings and astonishes the civilians, Dreyfus proceeds to use an Incantation Orb to project his voice throughout the kingdom, stating that the Seven Deadly Sins have infiltrated Liones to stage an attack. Worried about Zeal, Guila also heads towards the city, where the civilians had begun attacking and throwing rocks at Diane. Helbram proceeds to destroy more buildings to frame the Deadly Sins as villains. Guila notices the trickery and demands Helbram to explain his actions, which he replies by saying that the Sins will play the role of villains so that the Holy Knights can be heroes. Suddenly, Zeal notices Guila, when a building starts collapsing above. Without thinking, Diane leaps and dives forward to protect Zeal, causing herself to be completely immobilized. As the Holy Knights prepare to deliver the finishing blow, Howzer steps in to protect Diane, so does Guila.

Last Page of Chapter 67
Add a photo to this gallery

Retrieved from "https://nanatsu-no-taizai.fandom.com/wiki/Chapter_67?oldid=128996"
Community content is available under CC-BY-SA unless otherwise noted.