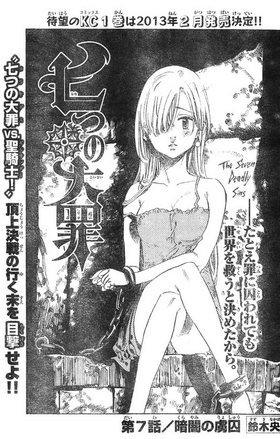 4
Dark Prisoner「暗闇の虜囚, Kurayami no Ryoshū」 is the 7th chapter of the manga, Nanatsu no Taizai.

Having discovered the whereabouts of Ban and King, Diane throws Gilthunder out of the forest, and Meliodas, Hawk and Elizabeth, now joined by Diane, head toward the Baste Dungeon, where Ban is imprisoned.

Meliodas gets up after tricking Gilthunder into revealing Ban and King's locations, as the Holy Knight realizes that, and refusing to stop the battle, repeatedly attacks Meliodas very quickly, only for the Deadly Sin to dodge every attack. He manages to go behind Meliodas, and points a sword at his neck, but is suddenly lifted by Diane with a hand. His attempts of escaping her grasp unsuccessful, he is thrown out of the forest, and falls on a church, destroying it, and walks away unscathed as the civilians who were praying in the church for divine retribution against the Holy Knights beg for help.

As Meliodas decides to head toward the Baste Dungeon, where Ban is imprisoned, Elizabeth objects his decision, stating that his grave wound should first be treated, and that fighting a Holy Knight in his condition would be dangerous. Though initially assuring her that the wound was nothing, Meliodas collapses due to it.

In Baste Dungeon, the two guards guarding Ban's prison cell are seen commenting about Fort Solgales' destruction by Meliodas. As one of them expresses his worries, the other assures him that even the Seven Deadly Sins wouldn't be able to conquer or destroy the dungeon, since four Holy Knights who were chosen by the "best of the kingdom", the Weird Fangs, were guarding it. As they then comment about Ban's pitiful state as a prisoner and that him being alive is a miracle in itself, they hear him humming.