The Hellfire Captain of the Holy Knights 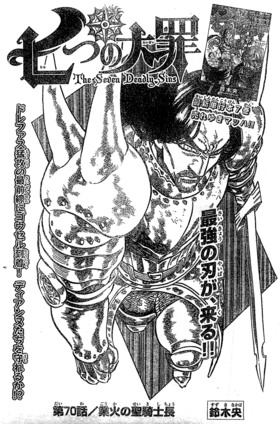 The Hellfire Captain of the Holy Knights「業火の聖騎士長 Gōka no Seikishi-chō」 is the 70th chapter of the manga, Nanatsu no Taizai.

Saving Guila from Dreyfus' attack, Gowther introduces himself to be the Sin of Lust, surprising all of the Holy Knights. Immediately, he engages in combat with Dreyfus, with the latter taking the initiative to use Charge and Pierce, blasting through Gowther's chest. Suddenly, the Deadly Sin counters the attack and traps him in an illusion of his past using Nightmare Teller. His past regrets are revealed through the nightmare, where his relationship between Zaratras is briefly depicted. He felt insecure and was jealous of his brother Zaratras' strength, but felt regretful for his death. The illusion completely incapacitates Dreyfus.

Last Page of Chapter 70
Add a photo to this gallery

Retrieved from "https://nanatsu-no-taizai.fandom.com/wiki/Chapter_70?oldid=129067"
Community content is available under CC-BY-SA unless otherwise noted.