What Lies In The Shadows 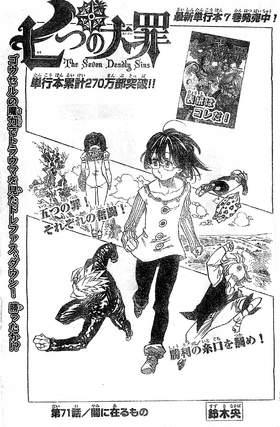 What Lies In The Shadows「闇に在るもの Yami ni aru Mono」 is the 71st chapter of the manga, Nanatsu no Taizai.

Dreyfus escapes from the nightmare, but Gowther remains trapped in his illusion due to a mysterious shadowy figure. Knocking down the Deadly Sin and preparing to deliver a final blow, Dryfus falls to his knees having suffered to much damage from Gowther's attacks. Gilthunder decides to carry Dreyfus, leaving Helbram behind to deal with Howzer and Guila. Thinking that they stand a chance against the Cardinal, the two Holy Knights prepares for battle, when Helbram suddenly uses Call of Inferno to cast a black fog which kills all who inhale it. Diane quickly stands up and bashes Helbram with her fist, ending his attack. She proceeds to tell the others to run away, when Helbram recovers and impales her with Killer Iceberg. However, before he is able finish her off, King arrives and repels the attack.

Last Page of Chapter 71
Add a photo to this gallery

Retrieved from "https://nanatsu-no-taizai.fandom.com/wiki/Chapter_71?oldid=89252"
Community content is available under CC-BY-SA unless otherwise noted.