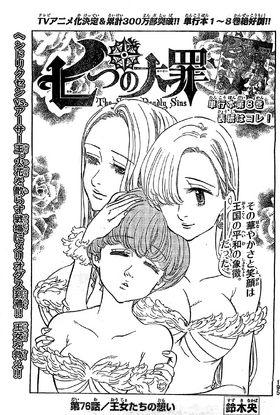 The Princesses' Feelings「王女たちの想い Ōjo-tachi no Omoi」 is the 76th chapter of the manga, Nanatsu no Taizai.

As Meliodas steps forward to face Hendrickson, he asks him about the location of Elizabeth, but the latter refuses to tell him. Meliodas immediately tries to kick him in the face, but Hendrickson easily blocks the attack. Meliodas follows with a series of quick slash attacks, but his opponent is able to dodge them with ease. Hendrickson then attempts a counter attack, which Meliodas blocks, but was send back.

In the mean time, Elizabeth finds Margaret's cell inside the dungeon and informs her about Veronica, blaming herself for her the tragedy. As Margaret tries to comfort Elizabeth, the female Holy Knight that abducted Elizabeth shows up. She wonders how the princess got out of her cell and notes that Margaret is in the cell by her own free will. Elizabeth refuses to believe it and when the Holy Knight tries to grab hold of her, Hawk suddenly appears and hits her, protecting Elizabeth. He claims that it is a forbidden technique which allows him to conceal his presence, and expresses his anger towards the Holy Knight for ignoring him. Immediately seeing Hawk, she stands up and angrily teleports him away to a mysterious dark place, stating that she despises pigs. She accidentally knocks Elizabeth unconscious during the process and opens up Margaret's cell, telling her that she will grant Elizabeth's wish to free Margaret. Carrying Elizabeth, the Holy Knight jests, stating that she can leave as long as she has the courage to escape.

In that moment, Hendrickson contacts the female Holy Knight asking whether she has relocated the princess. She questions him if her moving to different place is necessary, but Hendrickson tells her since their enemies are the Deadly Sins, the dungeon is not safe enough. She then notices that Hendrickson is in the middle of a fight and suggests him to use that, but he replies stating that it is not the right time. So instead, she tells him that she will send her cute little knight to assist him. Moments later, Gilthunder appears from a thunder cloud ambushing Meliodas, who is just able to parry his attack. Both exchanges multiple attacks, blocking each one of them, but Gilthunder eventually kicks Meliodas in the chest and knocks him backwards with Arthur Pendragon catching him. Meliodas thanks him and asks if he can give him a hand in the fight. He proceeds to ask him for his name, and after Arthur tells it to him, he mentions that despite Meliodas not knowing him, he is very familiar with the Deadly Sin. Finally, they both prepare to face Gilthunder and Hendrickson.

Last Page of Chapter 76
Add a photo to this gallery

Retrieved from "https://nanatsu-no-taizai.fandom.com/wiki/Chapter_76?oldid=129433"
Community content is available under CC-BY-SA unless otherwise noted.