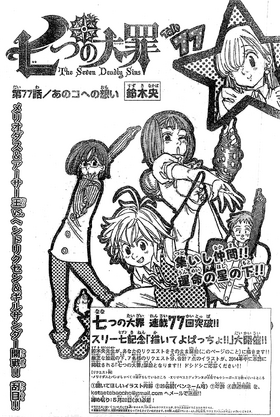 Feelings Toward Her「あのコへの想い Ano Ko e no Omoi」 is the 77th chapter of the manga, Nanatsu no Taizai.

After splitting with Meliodas, Ban was sneaking and looking at the Holy Knights, who strengthen their castle guarding. While continuing moving, he encountered a guard Holy Knight, who recognized him, but Ban quickly used his ability and took his teeth, to make him quiet and then gave him back his teeth. He proceeds with interrogating the Holy Knight and was able to learn the location of a secret entrance with long stairs and dark corridor.

After being healed by King, Diane tried to stand up, since she wanted to go and help Elizabeth. Howzer suggested to Dreyfus that they should go as well and stop Hendrickson and his plan for Demon Clan resurrection. He wanted the Kingdom's Holy Knights and the Seven Deadly Sins to fight together to stop the true enemy, and in that moment Gowther, who was unconscious on his back, woke up, revealing that Howzer isn't lying and his desire to help them is because of Diane. Dreyfus agreed to the truce, and after everyone expressed their desire to help Elizabeth, they went out to do it.

In the meantime, Hendrickson understood the Dreyfus fight was over, but didn't know the winner. As he told Meliodas that he won't be able to save the princess, Meliodas rushed in with the speed of the sound, attacking both Hendrickson and Gilthunder at the same time. Both were able to block, getting only a small cut on their faces, but were also pushed back. Then, Meliodas told him that he will save Elizabeth.

After Hawk was teleported to the unknown dark place, he was walking in circles. He was wondering where he was and what were the useless Sins doing. He then decided that he would save Elizabeth by himself, but the moment he heard a noise, he got scared and ran to hide. The one who made the noise was Ban, who went to see the Horn of Cernunnos, who was hidden there. Upon seeing it, he started talking, asking if the Goddesses heard him and if they did, he asked them to take his life and bring Elaine back to life.

Last Page of Chapter 77
Add a photo to this gallery

Retrieved from "https://nanatsu-no-taizai.fandom.com/wiki/Chapter_77?oldid=89259"
Community content is available under CC-BY-SA unless otherwise noted.