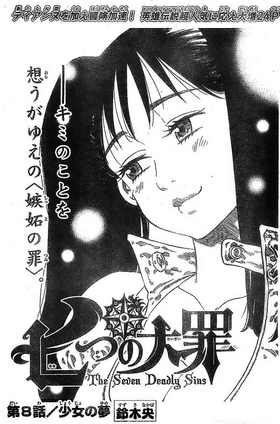 4
A Girl's Dream「少女の夢, Shōjo no Yume」 is the 8th chapter of the manga, Nanatsu no Taizai.

As Meliodas is being treated by Dana at Dalmary Town, Diane and Elizabeth argue and discuss about the aspects in which they envy each other. Then are then attacked by the Holy Knight Friesia, who tries to destroy the entire town along with the Deadly Sins, but is quickly defeated by Diane. Meanwhile, Ban escapes from his cell in the Baste Dungeon.

In Dalmary Town, located eight miles northeast from the Baste Dungeon, Diane is seen sitting next to a building, where Meliodas is being treated by Dr. Dana inside the building, and watched warily and with discrimination by the villagers. As the doctor comments that Meliodas still being alive itself is a miracle due to his grave wounds, one of Friesia's bugs that he uses to reconnoiter, find them, with the Holy Knight then deciding to launch the first offensive. While Elizabeth worries about Meliodas' condition, Diane decides to head to the dungeon by herself, and returns to Elizabeth that she would just be a hindrance, since she was only a princess and could only be Meliodas' nurse. Elizabeth replies that she wants to be of use, and that Meliodas was taking on "more than he can handle" to find the Seven Deadly Sins for her, which angers Diane, who says that Meliodas was not doing it just for the princess, and that he was always like that.

She continues, and narrates the story of how she and her captain first met. When she had just left the Giants' Clan and was traveling alone, she had gotten into an argument with a group of knights who were treating her very discriminatorily. Just then, Meliodas attacked them, and in response to them chastising him for supporting a giant, retorted that they were just ganging up on a single girl, with his treatment of Diane surprising her. After Meliodas quickly defeated them, he questioned Diane if she was scared, surprising her and making her feel as if she was the same height as him. Diane, having finished the story, then says since she is not small and cannot take care of her captain, the only thing she can do is to fight for him. As Elizabeth declares her wishes of wanting to have strength so that she could fight the Holy Knights and not be a hindrance, Diane declares her own of wanting to be small.

Suddenly, Hawk notices the sky near Baste Dungeon darkening, and the darkness coming toward Dalmary Town quickly. Elizabeth wonders if they were rainclouds, and if Gilthunder was their origin, but Hawk notices that it is a swarm of poison bugs, who start destroying the town with their poison. Though initially unable to fight them due to her fear of bugs, Diane overcomes it for Meliodas and quickly kills them all by raising huge pillars from the earth, much to Friesia's surprise. In the Baste Dungeon, two guards notice that the battle has started, and one of them states that the Seven Deadly Sins would not be able to win against the Holy Knights, as suddenly, Ban breaks his cell's door, much to their surprise, and casually comments that "taking walks once in a while" is nice.