The Threat Now Closing In 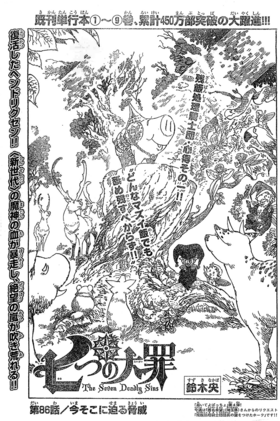 The Threat Now Closing In「今そこに迫る脅威, Ima soko ni Semaru Kyōi」 is the 86th chapter of the manga, Nanatsu no Taizai.

Jericho goes berserk and turns into a monster and tries to attack the group, but Diane stop her. While hesitating in killing her or not, they hypothesize for what is actually happening. Meliodas conjectures that someone make this on purpose.

To everyone's surprise, Hendrickson appears in front of them confirming their hypothesis, explaining how he used an incantation to make the New Generation Holy Knights' demon blood goes berserk to turn them into monsters.

After commenting on his new power after drinking demon's blood, Hendrickson tells Meliodas to hand over Elizabeth, and that if he does, he will let Meliodas live as a show of mercy to one of his own kind. Meliodas tells him to not lump the two of them together, telling Hendrickson that he is neither human nor demon, but just an idiot. Hendrickson says that he expected as much, beginning the battle.

King swiftly appears from behind, using Chastiefol's Form Five: Increase, but someone else shows up and bats him away. King is startled and realizes that it is Helbram, whom he believed dead. Hendrickson explains that Helbram was indeed killed by King many centuries ago, and that after 150 years of his corpse coming and going in the black market, Hendrickson bought it and revived him using the forbidden Druid technique Shisha Shieki, allowing him to bring someone back to life under his control. Hendrickson mocks King saying that he is lucky to be able to kill Helbram three times, and that it "isn't something that everyone can experience."

Enraged, Meliodas and Gilthunder attack Hendrickson, but they stop in their tracks due to Vivian holding Elizabeth and Margaret hostage. While she begins professing her love to Gilthunder, Hendrickson stabs both Meliodas and Gilthunder. Shocked, Vivian asks why he did that, and how it was not part of their deal, but Hendrickson says that it was indeed. Once Gilthunder is a corpse, he will never leave her side. He prepares to kill the two of them, but Elizabeth stop him. She would accept to go with him in exchange for sparing the lives of those two. Meliodas tries to prevent Elizabeth from doing this, but she asks that he should allow her to save him once in a while.

Then, Ban shows up with Hawk, apparently ready to kill Meliodas in order to revive his beloved, Elaine.

The Last Page of Chapter 86