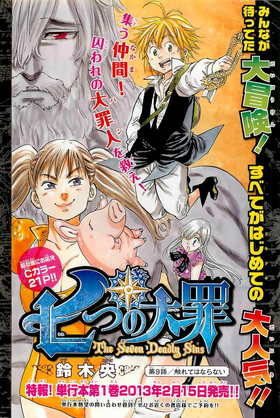 4, 5
No Touching「触れてはならない, Furete wa Naranai」 is the 9th chapter of the manga, Nanatsu no Taizai.

While Diane heads for the Baste Dungeon, Ban, who had escaped from his cell, is stopped by Jericho, who tries to stop him, but is easily defeated. Meanwhile, it is revealed that Dana had made a deal with the Holy Knight Golgius, and that the medicine he made Meliodas drink was a deadly poison. However, as the Holy Knight grabs Meliodas' broken sword, the Deadly Sin seems to still be alive, but with his eyes mysteriously being completely black and his forehead having a strange symbol.

Diane and Friesia's brief battle ending, Dr. Dana's young assistant notifies him about it, with him telling her that Meliodas' treatment was more important, and making the unconscious Meliodas drink a special formula that he had prepared himself. Outside, Elizabeth and Hawk awe at Diane's ability, and she, in one leap, leaps out of Dalmary Town and, handing Elizabeth the duty of taking care of Meliodas, starts running toward the Baste Dungeon. In the dungeon, Ban, who had just broken his cell's door and escaped, is question as to how he did it, and the reason. He answers that he simply kicked down the door, and that the reason was him hearing an interesting fact: his captain still being alive. Just then, Jericho, an apprentice Holy Knight, arrives to investigation the commotion, and demands that Ban return to his cell, to which Ban addresses her as "brat", and instructs her to "watch [her] mouth" while talking to a "hero".

Jericho, arrogantly ordering her subordinates to inform Golgius that since a prisoner had escaped, she had no choice but to kill him, attacks Ban with a very quick flurry of slashes. Though initially seeming to scream out of pain, he is revealed to have dodged all the slashes easily, and to have even used them to cut his hair, which had overgrown during his imprisonment. When she expresses her shock at him deftly dodging all her attacks despite having had steel stakes stab him very recently, all his wounds are shown to have completely healed, surprising her even more. He then points at the scar on his neck, informing her that only that was a real wound, and also adding that it was a special case.

At Dana's house in Dalmary Town, Elizabeth and Hawk are seen to be sitting beside Meliodas and worrying about his condition, as Dana enters as questions them about it. Hawk comments him sleeping very deeply seemed as though he was dead, to which Dana replies, "Of course." Immediately, an unseen voice thanks Dana for his "hard work" and holding his end of "the deal", with Dana then informing Elizabeth that the medicine he had made Meliodas drink prior was actually a deadly poison. The same voice then continues that even "they" wouldn't come out unscathed if they found the Seven Deadly Sins, and for the kingdom to achieve its goals, it has to take significant measures. As Elizabeth commands the owner of the voice to show himself, the Holy Knight Golgius, a member of the Weird Fangs, suddenly appears behind her, greatly surprising her and Hawk.

Stating that he has come to "pick Elizabeth up" and take Meliodas' sword, which he states to be useless in the apparently dead man's hands, he grabs the object. A flashback to when the Seven Deadly Sins were an active group of knights then begins, with Ban, who had longer hair then, and Meliodas sitting near a fire at night, as the former asks the latter about his broken sword, and the reason why he never leaves it, even while drinking and peeping into women's baths, to which Meliodas replies that it was similar to his stuffed animal. Ban, wanting to know more about the weapon, grabs the weapon and tries to take it, but is stopped by Meliodas, who warns Ban to not anger him. Ban is, however, only intrigued by this warning, and states that though being with Meliodas for many years, he had never seen him get angry, and was curious as to why he was called the Sin of Wrath. He continues his attempt of taking the sword, but is then pushed away by Meliodas giving him a deep wound on the neck. As Ban comments on his new discovery of Meliodas' "secret side", the Sin of Wrath begins explaining what the sword is, but is cut off by the flashback's end.

Back in the present, Golgius has managed to take the sword, only to find Meliodas, who is alive, still grabbing its hilt, to Dana's surprise and the Golgius's annoyance. The Holy Knight tells him to let go of the sword, to which Meliodas, who mysteriously has jet black eyes and a strange symbol on his forehead, declares that he would not let go of it even if he dies, and that it was the only way he could atone for his sins.