The Spirit Spear Chastiefol「霊槍シャスティフォル, Reisō Shasutiforu」 is King's Sacred Treasure, and a holy weapon crafted from the Sacred Tree found only in the Fairy Realm.[1]

Chastiefol has ten different forms[2], but frequently appears as a mottled, green pillow that King carries with him. During combat, it can transform into a long, broad spear with two out-turned lugs at the base of the head, that forms a guard similar to that of a boar spear. Each of its forms also has a "true form" that King is able to unleash for even more power.

It is much stronger than steel and has mysterious qualities of the Sacred Tree, which King's ability, Disaster, draws out.[3] It is capable of regenerating itself even after being split in two or in pieces.[4] It has ten different forms and can be transformed from one to another at King's will.

The True Spirit Spear Chastiefol「真・霊槍シャスティフォル, Shin Reisō Shasutiforu」 is the complete form of Chastiefol achieved only when King draws out the true power of the Sacred Tree.[21] It is activated with the command "Sacred Treasure Release"「, Jingi Kaihō」, after which King's body is flooded with magic from the Sacred Tree.[22] The magical burden it puts on King is so great that his body cannot physically sustain the immense power and he is left exhausted and wounded.[23] Releasing Chastiefol is also shown to cause King's power level to momentarily double that of an Albion.[24] After obtaining his wings, King became able to accede to the true power of Chastiefol without any repercussion in his body.

After fully developing his wings and unlock his full potential, King acquired a New True Spirit Spear Chastiefol「新・真・霊槍シャスティフォル, Shin Shin Reisō Shasutiforu」, which appears larger and more powerful than its predecessor. King is also able to use multiple forms of his new Chastiefol at the same time, being able to use up to four. In return, each one's precision and power drop greatly. 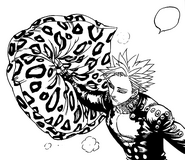 The pillow used as a shield. 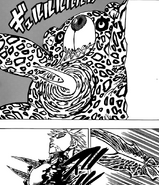 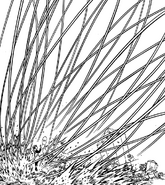 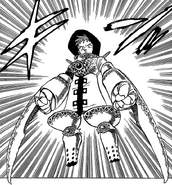 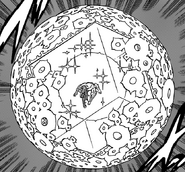 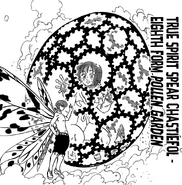 Chastiefol's speed while on the offensive