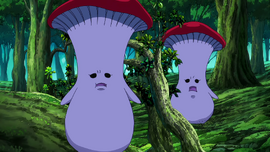 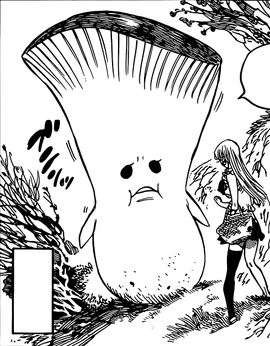 Chicken-Matango「チキン・マタンゴ」 is a King Trumpet-Type Mushroom, a species that has the most unique and potent abilities of all the types of mushrooms, being able to shrink other creatures when in danger.[1]

Chicken-Matango has a form of a giant mushroom with deep black eyes.

Chicken-Matango are very timid, and largely avoid being seen by humans. When in danger, they manage to escape by releasing spores that shrink other creatures.[1]

After Meliodas, Ban, King, and Hawk leave for Vaizel, Elizabeth and Diane head into the forest to find ingredients for dinner, where the princess finds a Chicken-Matango. Diane, considering it an ingredient, tries to grab it, but the creature, realizing itself to be in danger, releases spores that shrink both of them, allowing Diane to enter the Fight Festival in Vaizel.[2]

Retrieved from "https://nanatsu-no-taizai.fandom.com/wiki/Chicken-Matango?oldid=139101"
Community content is available under CC-BY-SA unless otherwise noted.