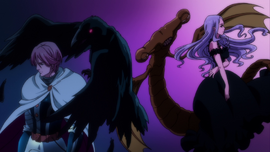 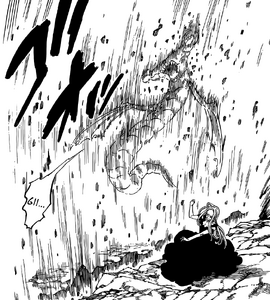 Chimera「」 are creatures who can shape-shift whilst stalking their preys. A Chimera was secretly following Margaret Liones, forcing Gilthunder to follow orders from Hendrickson and Vivian.

They are large lizard-like creature with a pair of wings, hammer-shaped head and large eyes. They are brownish green in color.

Nothing is known of them, except that one of them was used by the Holy Knight, Vivian, to make Gilthunder follow her orders. The Chimera was secretly following Margret for the past ten years, threatening to kill her if Gilthunder disobeyed her or Hendrickson.

During the infiltration of Liones, Meliodas discovers about Gilthunder's situation. As Margaret ran towards Gilthunder to stop him from killing Meliodas, Meliodas spots the creature and slays it.

The Chimera have the ability to camouflage themselves by changing into animals such as crows and lizards. They also have resistance to lightning-base attacks.

Gilthunder's Chimera disguised as a crow

Margaret's Chimera disguised as a lizard

Retrieved from "https://nanatsu-no-taizai.fandom.com/wiki/Chimera?oldid=145915"
Community content is available under CC-BY-SA unless otherwise noted.