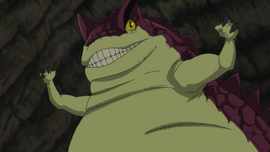 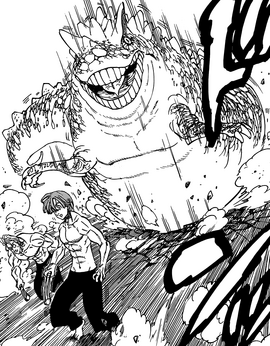 Clay Dragons「」 are extremely powerful dragons that exist in the Druid's Cave of Training.

Clay Dragons have a large rounded body with a short pair of three-fingers front claws.

Clay Dragons are resistant to electricity and their heavy weight allows it to withstand heavy winds.[1] They dig and travel underground, intelligently resurfacing to exercise surprise attacks. Utilizing their tails, they are able to leap into the air and ground pound to cause a ground shockwave.

In order to prepare for the battle against the Ten Commandments, Hendrickson and the Three Misfits arrive at the Sacred Land of the Druids to train. In the Cave of Training, Gilthunder and Howzer are tasked to fight against a Clay Dragon without their armors and weapons. As the fight progresses, the two realizes that their current style of combat is ineffective, and slowly recollects their respective lessons from Meliodas and Dreyfus. Both Holy Knights adopt different methods of fighting, as Merlin notices their Power Levels starting to change. However, the two accidentally lets the guard down for the briefest of seconds and the Clay Dragon capitalizes on the moment to knock them both unconscious.

Retrieved from "https://nanatsu-no-taizai.fandom.com/wiki/Clay_Dragons?oldid=139103"
Community content is available under CC-BY-SA unless otherwise noted.