A Commandment「戒禁 Kaigon」 is a unique power created by the Demon King over 3,000 years ago, and bestowed upon ten different elite warriors of the Demons. There are ten in total and each has a unique curse of absolute power bestowed upon anyone who breaks its rule, even upon the holder himself/herself.

After becoming the new Demon King of his own volition and sacrificing his godly power, Meliodas has destroyed all of the Commandments.

The Commandments are a set of ten decrees that were created by the Demon King when he took half of his power and split that into ten fragments to create the Ten Commandments, who derive their group name from their powers.

The curses will only be lifted if the victim defeats its wielder or at the victim's death. The Commandments can be removed from their wielder using a special spell, but only if they give their consent or if they are left powerless, unable to fight or die.

Absorbing a Commandment turns any member of another race into a demon, but should a goddess absorb a Commandment, it will rot away at their soul due to their nature oppossing that of the Demons. Mael, the only goddess to receive a Commandment, was bestowed one after his memories were altered by Gowther and his doll so it’s unknown if the same effect applies if he had his real memories intact.

Moreover, if anyone, demon or not, tries to take in more than one Commandment, it would destroy them. Monspeet himself said only the sons of the Demon King, Meliodas and Zeldris, could survive such a feat, but it is revealed that Mael, as Estarossa, is capable of doing so too, but at the cost of warping his broken soul even more and in the end losing his sanity and failed to fully take in four of them, meaning Meliodas and Zeldris, as the only true sons of the Demon King, are the only two beings who can successfully take in all ten of the Commandments.

After Gowther’s memory spell wore off and Mael regained his memories, his body holding three Commandments took on a mixed appearance of a goddess and a demon where his left half is that of a demon and the right is that of a goddess. In this form, he’s able to use both his holy and demonic powers and even combine them together. After absorbing a fouth, Mael was able to materialize the Commandments in physical forms and use them for various means of attacking Gowther and the others.

When Gowther entered into Mael's mind it is revealed that the Commandments themselves have a certain degree of sentience, as they attempted to manipulate Mael into handing over his body to them and also attempted to banish Gowther from Mael's mind to prevent him from interferring. However despite their sentience and power, Gowther has stated that they cannot make use of their immense power on their own without a host to use it for them.

Meliodas states that by absorbing all ten of the Commandments, he can reach a level of power equal to that of the Demon King and Supreme Deity, as he is doing so to end the curse placed on Elizabeth Liones. However, it is later revealed that absorbing all the Commandments really means becoming the new vessel of the Demon King, this being the true reason why he created them.[1]

After absorbing all the Commandments, the vessel can undergo changes, as Meliodas and Zeldris' appearance physically ages into an adult.

The Demon King stated that the Commandments can feed directly to him information of the holders, to keep an eye on them, as to prevent any rebellion attempt against the Demon King.[2]

After the Demon King was defeated by the Sins, Meliodas went into his Demon King form and destroyed the Commandments to ensure that his father will never resurrect again, at the cost of giving up his god-like power. 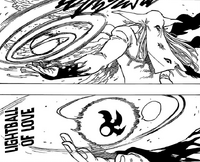 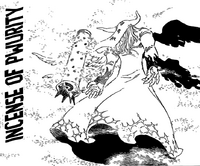 Several spells have been used in relation to the commandments, mainly in form of manipulating the possession of the Commandments.

A spell used to remove the decree from the possessors or their corpses. In case the possessor is alive, that one must either be rendered unable to fight, be unloyal to the Demon King, or willingly desire to surrender the decree, for this spell to be effective. After the decrees are removed this way, they are not automatically absorbed by the remover, instead being simply held by them.

Retrieved from "https://nanatsu-no-taizai.fandom.com/wiki/Commandment?oldid=164773"
Community content is available under CC-BY-SA unless otherwise noted.