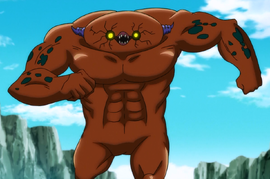 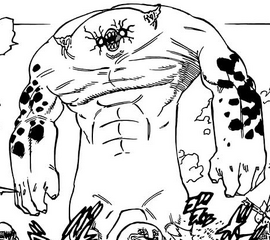 Copper Demons (alternatively called Copper「 Kappā」) are a family within the Demon Clan.

They are large, bipedal demons, with their eyes set level to their mouths and two purple, cone-shaped horns on both sides of their heads. As the name suggests, they are copperish in color. In terms of actual size, they are approximately twice as tall as an average Red Demon.

Whenever they attack people, they always seem hungry for their souls.

A Copper Demon along other demons is terrorizing Ordan Village. When the Seven Deadly Sins arrive, he is first attacked by Meliodas and Ban, but he is able to withstand them. Then the Demon punches Escanor repeatedly, but just ends with his own hands injured. Thanking the "massage", Escanor cut the Copper Demon in half with Rhitta.

A Copper Demon is seen terrorizing Pelliot's village next to an Ochre Demon. When the Seven Deadly Sins appear, the Copper Demon is easily killed by King using his newly dominated true Increase. King states that the demon was very weak and that is why he was able to kill him so easily.

A Copper Demon appears among a battalion of demons that was being fought by Guila, Jericho and Howzer. The demon manages to catch them all and proceeds to devour their souls, but before he can do that, is destroyed by Sariel's Ark.

Several Copper Demons are part of the Demon Clan army that is faced by the Holy Knights during the Holy War. One of them manages to strike a blow to Deathpierce, but is then killed by Waillo. The others are quickly eliminated by Diane.

An Copper Demon attacks during the second wave of the demon army, crushes some knights before being attacked by Arden and Waillo and his arm cut by Matrona. However, he manages to shoot and injure Matrona, but is eliminated by Elaine. An Copper Demon tries along with several other demons to devour Elaine when she falls, but all are killed by Ban.

Copper Demons are incredibly powerful, possessing vast physical strength, their power level is ranked the highest among lesser demons besides the Silver ones, capable of breaking the hand and injuring one of the Pleiades of the Azure Sky, Deathpierce, a powerful holy knight, despite being greatly empowered by the Archangel's Breath of Bless.

Retrieved from "https://nanatsu-no-taizai.fandom.com/wiki/Copper_Demons?oldid=140470"
Community content is available under CC-BY-SA unless otherwise noted.