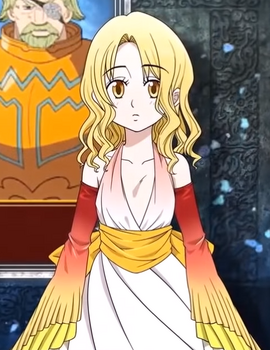 Dahlia「ダリア」 is the second king of the Fairy King's Forest.

Not much is known about his appearance. As a Fairy King, Dahlia most likely possessed a large pair of wings.

In the game Unjust Sin, Dahlia bears a heavy resemblance to Elaine.

Dahlia acted as the Fairy King at some point after Gloxinia joined the Demon Clan, with Gerheade acting as his assistant. Meliodas was also familiar with Dahlia.

As the former Fairy King who possessed a pair of full grown wings, Dahlia was likely a powerful being.[3]

Retrieved from "https://nanatsu-no-taizai.fandom.com/wiki/Dahlia?oldid=143708"
Community content is available under CC-BY-SA unless otherwise noted.