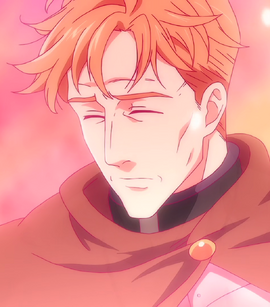 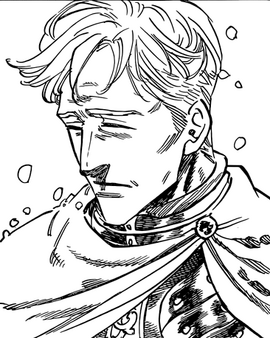 Dale「デール」 was a Holy Knight and father to Guila and Zeal.[2] He was a member of the Old Generation Holy Knights.

Dale was a tall man with short, light hair and thick eyebrows. Much like his daughter, Guila - his eyes appear to be naturally closed. Dale was clothed in armor typical of a Holy Knight during his flashbacks.

Dale was remembered as a kind man and a loving father. He admired the Seven Deadly Sins and wished to become like them so his daughter would be proud of him.[3] Though classed as a traitor after his disappearance, the incident is shrouded in mystery.

After being mutated into a hybrid Demon, Dale lost his sense of humanity, still his remnants of them remain before losing them completely.

Dale (known affectionately as "Doting Dale" by his comrades) joined the Holy Knights 10 years prior to the beginning of the series.[4] He disappeared while undergoing a mission, leading to the deaths of many people.[5] His disappearance was considered traitorous[6], and he was reported to have deserted his post. In the wake of this incident, his children were left to deal with the shame his actions had brought upon their family.

The reality of Dale's disappearance is revealed to be the work of Hendrickson, who offered him great power through the process of drinking the blood of a Red Demon.[7] As part of the "Old Generation" of Holy Knights who had gone through this same process; Dale's power increased dramatically, though this power made him wild and uncontrollable and as such he was deemed a failure.[8] Fearing death at the hands of Hendrickson's men, Dale fled the kingdom.

Many years later he was discovered by Gowther who recently fled after the Seven Deadly Sins were accused of overthrowing the kingdom in the mountains near Ordan.[9] His appearance during this time was radically different. His mind had long since been lost and his body was deformed into a grotesque, distorted giant. Sensing the danger posed by Dale's monstrous incarnation; Gowther used his armor to seal the tragic knight's raw, uncontrollable power.[10] However Dale managed to nearly fatally injure Gowther who will later collapse in unconsciousness and found by Pelliot at the small village of Ordan before he was hidden in the mountains where he's now known to the locals living there as the "Mountain God".

In the anime, Dale in Gowther's enchanted armor accompanied a disguised Gowther to Vaizel where he remained hidden in a cave while the Goat's Sin of Lust was in town reading and buying books. Dale made few social interactions with Gowther while inside the cave.

During the Holy Knights' attack on Vaizel, Dale was struck by one of his daughter Guila's Explosion bombs that were obliterating most of the town, resulting the small breaking of his armor, foreshadowing the prior breaking of the enchanted armor. Surviving the attack, Dale was taken back to the forests of Ordan by Gowther for recuperation and search for armor adhesive to repair the armor.

Reports of an "Armor Giant" in the forests near Ordan led Helbram to send the fierce Holy Knight group Dawn Roar on a mission to obtain the giant's head. Many regular knights accompanied Dawn Roar on this mission. The armor giant was soon located and the knights wasted no time in claiming it is head. Initially believed to be Gowther, the giant was later identified to be Dale - now in the form of a grotesque demon. In his mindless rage, Dale completely slaughtered every knight bar the Dawn Roar themselves.

The Holy Knights then engaged in a standoff with the monstrous Dale, leading both sides to stand motionlessly in wait of the other to strike first. At least half an hour passed before the silence was broken by the mischievous Pelliot who had arrived to "capture the criminal". In his naivety, Pelliot strikes at Dale with a sword, which causes the monster to swing his fist at the child. Before Pelliot is can be harmed, Armando pushes him out of the giants reach, though is crushed beneath Dale's large fist in the process. The Dawn Roar take this opportunity to attack the giant.

As the Dawn Roar relentlessly attack Dale, the Seven Deadly Sins intervene in order to save the giant the mistakenly believe to be their comrade. In the midst of the battle, the Holy Knight Weinheidt fires a magically charged arrow in a final effort to destroy the giant. Before the arrow can make contact, Armando stands and catches it with his bare hand. Revealing himself to be the actual Gowther; Dale lets out a massive release of demonic power felt by the Sins and Dawn Roar as Slader states that one of them will die try fighting to take his head and Gowther slices the giants head off with a single strike and offers the head to the Dawn Roar's captain. With respect to his strength and the legend of the Seven Deadly Sins, they accept his offer and hastily leave.

Extensive damage to the armor causes the seal on Dale to weaken, and the monster spawns four heads from it is body. Gowther reveals that the monster was once a Holy Knight, and in the center of it is four heads Dale's body partially emerges - revealing his original appearance, though he is unresponsive. Wasting no time, the monster attacks the Sin with its numerous hands, though is unable to land a blow. Going on the offensive, both Meliodas and Ban attack while Gowther takes Pelliot to safety. Dale receives many blows from the two Sins, but is ultimately unharmed and swiftly returns the blows, knocking back both Meliodas and Ban. The two are saved from injury by King's sacred treasure, which he then sends to combat the beast. The sacred treasure Chastiefol is easily broken by Dale, who freezes it to the point where it is easily shattered by a single strike.

With Dale's body now lying in pieces, Ban plucks a plant-like creature from the torso. The creature attempts to attack Ban, but is quickly crushed in his hand. As Dale lays dying, he quietly thanks Ban and sheds a single tear.

The Sins dig a grave for their former comrade and place Dale's pendant upon it. The pendant is later retrieved by Jericho and given to Dale's daughter, Guila.

Gowther decides that Dale, and he should take shelter in a cave in the forest of Ordan. However, the bats caused Dale to run in fear towards a spot in the forest. Gowther finds him and decides to give him some seeds to feed to the birds. Gowther started relaxing with Dale until he suddenly smashes a wild rabbit. Gowther returns the rabbit to its place where he also found a piece of wood which he carved in the cave to fill the gap in Dale's armor. He eventually leaves the cave to search for Gowther.

While King mends Chastiefol, Meliodas and Ban pick up the weapons of fallen knights to fell Dale. Dale expels forth venom from on of his four demon mouths, but is countered by Meliodas, who attacks him with black flames that set his shoulder aflame. Before Meliodas can finish off the pitiful beast that was once Dale, he hears a murmur coming from the beast. Seeing the head and torso of a man, he realizes that the Holy Knight is still alive within the monster's flesh. The monster uses this chance to capture Meliodas with it is tongue. Before it can react, an arrow of light strikes through Dale's chest. Ban takes this time to free Meliodas, and Gowther reveals that the strange light arrow is his power - Invasion. Now under Gowther's illusion, Dale's heart is ripped from his body by Ban. This does not kill him, however, and the Sins hear him mutter a few words.

Gowther's power entraps Dale within his own memories and he sees and illusion of his children; Guila and Zeal. Within the memory most dear to him, he takes on his original appearance and asks his children for forgiveness; telling them he was weak and wishing he could have stayed with them longer. Before he returns to reality, he asks Guila to protect her brother and tells them both that he loves them.

Now completely devoid of his former self, Dale is lost within his demonic form and screams out in rage. The four demonic heads merge into one and his arms split into multiple limbs. Dale's original face still resides in the centre of the demon's chest and Meliodas finally recognizes him. Both Meliodas and King remember Dale as a kind man who had once looked up to them. While under attack from the monster, Meliodas tries his best to reason with it - hoping that Dale is still somewhere within, but is ultimately unsuccessful. Ban, sensing that Dale has been completely enveloped by his demonic form, scolds Meliodas for being unwilling to kill the creature. When Elizabeth arrives and throws to Meliodas his former lover's sword, he makes peace with the fact that Dale can no longer be saved and the demon must be killed. He asks Dale for forgiveness before striking him down with a single attack.

Dale's strength and abilities as a human currently remain unknown, though as a Holy Knight it can be assumed that he was quite strong. He was also seen carrying a sword on his waist.[11]

Dale possessed the enchanted armor given by Gowther as a form of containment of his wild demonic powers and it allowed Dale to fight enemies in controlled strength as shown taking out groups of knights and battling Dawn Roar without more than necessary of his strength prior to the breaking of the armor.

The monstrous form that Dale takes on after his disappearance greatly increased his strength to the point where he was able to effortlessly annihilate a group of knights. He was also able to stand his ground against the dangerous knight group Dawn Roar and managed to take numerous attacks from both them and the Seven Deadly Sins before finally succumbing to Meliodas' immense strength. Dale displayed multiple demonic power during his fight against both groups and was shown to have a strong regenerative ability and incredibly tough skin.

Dale loved both his daughter and son more than anything, as evident by his most desired memory being of the two of them. He joined the Holy Knights in order to become like the Seven Deadly Sins, in the hopes that it would make his children proud.

Retrieved from "https://nanatsu-no-taizai.fandom.com/wiki/Dale?oldid=136867"
Community content is available under CC-BY-SA unless otherwise noted.