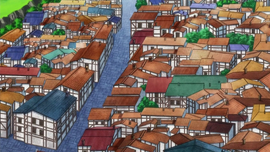 On their way to Baste Dungeon, Diane, Elizabeth, and Hawk stopped at Dalmary Town to get medical help for healing Meliodas' sword wound. As he was being healed by Dana, they are found by Friesia, who decides to launch an offensive. Just as Diane decides to go to Baste Dungeon herself, Friesa uses her bugs to spray corrosive poison, thus also damaging the village and endangering the villagers while attacking them. Diane rises the ground as pillars, and to Friesia's surprise, destroys all the insects[2], but leaves many pillars in the village before leaving for the dungeon.[3]

At the same time, Dr. Dana gives Meliodas a special medicine he had prepared, saying that it would give Meliodas "peace"[4], for which he was thanked by Golgius a few minutes later. Dana reveals that the medicine was actually a deadly poison made from Wolfsbane, Belladonna, Tiger Beetle, Henbane Leaf and that Meliodas was dead. Golgius then appears before Elizabeth and says that he has come to pick her up and take back Meliodas' sword.

However, as Golgius grabs it, Meliodas is revealed to be alive, with his eyes black and with a strange symbol on his forehead, and the Deadly Sin says that he wouldn't let his sword go even if he dies[5], making Golgius escape in fear.[6] Meliodas' wound is shown to have mysteriously healed, as Golgius is soon found by Meliodas. However, the Holy Knight surrenders, telling them that he is a coward and doesn't like fighting, but Meliodas notices the blades that he threw and blocks them. When Dr. Dana demands that the Holy Knight return his daughter back, Golgius disappears and then reappears behind Dana, killing him by stabbing him from the back. He also tells him that his daughter will join him, but only in the next world. He tries to attacks Elizabeth, but blocked by Meliodas.[7]

He repeatedly attacks Elizabeth as Meliodas, Hawk and Elizabeth run with the Deadly Sin moving Elizabeth out of the way every time. They eventually enter an old building, where Golgius tries to kill Meliodas from behind but falls for a trap Meliodas had set. In the bottom floor, his abilities are revealed, before he is attacked at point blank range by Meliodas, sending him flying into the street.[8] As he is being asked as to why he is after the sword and Elizabeth by Meliodas, he takes advantage of a small distraction and escapes on a horse, and leaves the town while commenting how scary his mission was.[9]

Just as Meliodas and the two are decide to follow him, Elizabeth finds the wounded Dana, who tells her that he had only wanted to save his daughter, who was kidnapped by Golgius to force him into poisoning Meliodas and seemingly dies. Elizabeth blames herself, saying that if she had never requested Meliodas to help her find the other Seven Deadly Sins, Dana would still be alive, and Meliodas would never have been wounded by Gilthunder and nearly killed by Golgius. However, Meliodas, in return, says that he understand her blaming herself, he also questions her if her desire to protect the kingdom and its people is weak enough to be broken by a "tear or two". He also says that he would fulfill his promise with her even if she were to die, going on to explain that all people eventually die, and manages to encourage her after explaining what being a knight meant.[10]

As Hawk and Meliodas leave for Baste Dungeon, they decide to leave Elizabeth due to the danger of the Holy Knights, she comes by herself, saying that although she isn't a knight, she would keep fighting for the people of the kingdom even if Meliodas were to die, and joins them.[11] After the Baste Dungeon is destroyed and the Weird Fangs are defeated, Ban, Meliodas, Hawk, Diane, Sennett and the other captives from the village return, to the shock and surprise of the village, with Sennett having a reunion with her father, Dr. Dana, who is revealed to be mysteriously alive. Dana says that he doesn't know what happened and reveals that his huge wound had mysteriously healed very quickly, just like Meliodas' wound. Sennett questions Dana as to why he and her were attacked and imprisoned, respectively by the Holy Knights. As she is answered by Dana, she tells her father that him trying to kill Meliodas was not his fault, but the Seven Deadly Sins' fault. However, the doctor argues in favor of Meliodas, explaining that even though he had tried to kill Meliodas, the young man saved her and stood up against the Holy Knights. Dana also offers to treat Meliodas and the others to dinner as thanks for what they did.[12]

In the evening, Meliodas formally introduces Elizabeth to Ban, who is shown to be extremely excited and shocked when he sees Hawk talking. During the party, Diane tells Elizabeth that although she isn't interested in humans' countries, she wouldn't mind fighting for her, and that she did have the power to move the hearts of herself and Meliodas. She also asks Elizabeth whether she can address her as just "Elizabeth", and tells the princess that she can address her as just "Diane" as well. Dana is then shown to be doubting the fact that the Seven Deadly Sins are actual criminals, and thinks that he feels the presence of an immeasurably great will.[13]

Dalmary Town after Diane's attack
Add a photo to this gallery

Retrieved from "https://nanatsu-no-taizai.fandom.com/wiki/Dalmary_Town?oldid=77098"
Community content is available under CC-BY-SA unless otherwise noted.