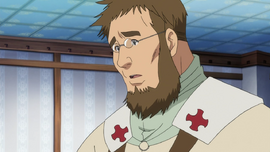 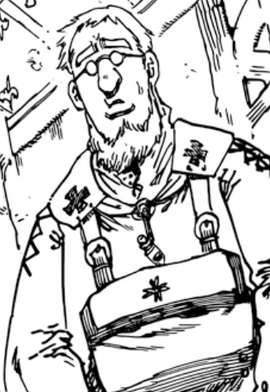 Dana「ダナ」 is an elderly doctor who resides in Dalmary Town, and has a daughter named Sennett.

Dana wears old fashioned round glasses and has a somewhat shaggy beard.

Dr. Dana is a level-headed person and is extremely dedicated to his work as he did not stop "treating" Meliodas even when Friesia was destroying the town.[1] He cares deeply about his daughter as he was willing to even poison Meliodas to have her released from imprisonment.[2]

Meliodas is brought to Dana in order to heal the wound he had received from Gilthunder. As the doctor starts treating the wound, he is surprised that the young man was still alive after having received a very deep sword wound, and also a burn that resembled a lighting burn.[3] While Diane is fighting Friesia, he prepares for the unconscious Meliodas a special medicine, saying that it would give him "peace"[4], for which he is thanked by Golgius a few minutes later. Dana then reveals that the medicine was actually a deadly poison made from Wolfsbane, Belladonna, Tiger Beetle, Henbane Leaf and that Meliodas was dead.[5]

However, Meliodas awakes after Golgius tries to take Meliodas' sword, surprising Dana, since the poison was deadly and should have killed him.[6] After Golgius quickly escapes, and Dana tries to follow him and soon finds Golgius, who is also found by Meliodas and Elizabeth at the same time. Dana begs the Holy Knight to return his daughter, since although Meliodas did not die from the poison, Dana had made him drink the deadly poison, just as he was instructed. Golgius, however, disappears, telling Dana that he will return his daughter, but only in the afterlife, and fatally stabs Dana from behind.[7] After Golgius' defeat by Meliodas and the former's subsequent escape, Elizabeth rushes to his side to see and finds him in his apparent last moments. Dana then apologizes to them and explains that his daughter, Sennett, was kidnapped to force him into poisoning Meliodas, and he had just wanted to have his daughter returned to him. His hand then falls to the ground[8], with Elizabeth then bringing him back to his house.[9]

After the Weird Fangs are defeated and the Baste Dungeon destroyed, he is revealed to be alive, much to the surprise of Meliodas and Hawk, and is reunited with Sennett. He claims to not know as to what had happened and reveals that his huge wound had mysteriously healed very quickly, just like Meliodas' wound. When Sennett tells him that trying to kill Meliodas was not his fault, but the Seven Deadly Sins' fault, he argues in favor of Meliodas, saying that although he tried to kill him, the young man saved his daughter and stood up against the Holy Knights without hesitation.[10] In the evening, he treats Meliodas, Elizabeth and the others to dinner to thank them[11] and doubts the fact that the Seven Deadly Sins are actual criminals, while thinking that he feels the presence of an immeasurably great will.[12]

Dana, while not possessing any superhuman abilities, is a very skilled doctor, who is knowledgeable with medicines, herbs and poisons.[13][14]

Dana cares deeply about his daughter, going as far as to killing someone save her from imprisonment.[15]

Retrieved from "https://nanatsu-no-taizai.fandom.com/wiki/Dana?oldid=143005"
Community content is available under CC-BY-SA unless otherwise noted.