The Dawn Roar「, Dōn Roā」 is an independent order of knights within the Holy Knights renowned for completing their mission no matter what the cost. They make their first appearance on the orders of Holy Knight Helbram, who designates them to assassinate the rumored Armor Giant located in Ordan Forest.

Nothing has been revealed about the history of the group yet but King met them several times in the past and stated that they are famous for their single-minded goal to take the head of the target on missions they were assigned to and will never stop until the targeted one was killed or if they were defeated themselves.

It is believed that the Dawn Roar was assembled by King Liones, after the Seven Deadly Sins disintegrated, as a replacement for the group of legendary knights who were branded as traitors.

Helbram orders the Dawn Roar to travel to Ordan where a local knight has spotted the Armor Giant in the forest. Once Slader and the Dawn Roar travel to the location, they bring along a group of knights to which they are beaten or killed by the Armor Giant who turns out to be alledgedly a Seven Deadly Sins member, Gowther. Slader orders his group to make a stand off against Gowther and attack when he makes a move. Slader and the rest wait for half an hour until a young boy comes to them and attack Gowther, thinking he was a dangerous criminal.

Pelliot is about to be smashed by Gowther when is saved by Armando. Slader and the Dawn Roar know that was the time to attack to which they jump on Gowther. As they attack Gowther, they continue their attack facing the other Deadly Sins as well. As Weinheidt shoots his powerful arrow attack, Armando suddenly gets up and stops it. He then later reveals himself to be the real Gowther.

After listening to Gowther's proposal, Slader reluctantly accepts it and orders his team to withdraw but swears that once they are given a mission to take the Seven Deadly Sins' heads eventually, Dawn Roar will fight them.

Later at the forest, Dawn Roar begin discussing among themselves of what has transpired, as Slader wonders why Helbram ordered them to kill the Armor Giant, despite the fact that the New Generation can easily do that and finds it suspicious.

Later back at the kingdom, the rest of Dawn Roar hear the commotion at the King's chambers only to find their captain attempting to force his way in many times after suffering feedbacks of his attacks due to the room's Perfect Cube. Hearing their voices, the king immediately orders Dawn Roar to stop their captain from hurting himself, to which they hastily comply. After Bartra is freed, he ordered Dawn Roar to provide medical aid to Slader immediately.

Later the Dawn Roar helped facilitate the arrest of former Great Holy Knight Dreyfus under their custody after he admitted his crime of murdering his brother Zaratras but were interrupted when Great Holy Knight Hendrickson destroyed the castle and caused the Demon blood of the New Generation to awaken and mutate them into hybrid Demons. After they managed to save themselves, the Dawn Roar minus still-wounded Slader immediately rushed to battle them in defense of their kingdom.

The group is later shown to have split up, with Slader and Simon staying to combat Hendrickson, while Hugo, Jillian and Weinheidt, along with Howzer, left to transport Dreyfus. However, they were brutally attacked by Dreyfus himself who went off to battle Hendrickson. And though Howzer was able to survive, Hugo, Jillian and Weinheidt perished, leaving Slader and Simon the only members of the group left.

In the anime, Dawn Roar arrived on time when the mutated New Generation Holy Knights were rampaging in the capital city and immediately dealt with them while Slader and Simon confronted Hendrickson with the Sins and the Holy Knights at Merlin's castle.

After Hendrickson's defeat, Dawn Roar is at the king's side during the National Foundation Day Festival.

After Fraudrin is marked with Dead Man Revenge seal, he is haunted by the deceased members of the Dawn Roar.

Slader and Simon join the the Defensive Force. 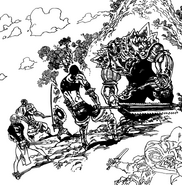 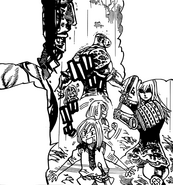 Dawn Roar in a stand off