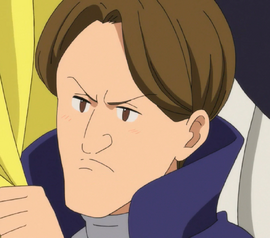 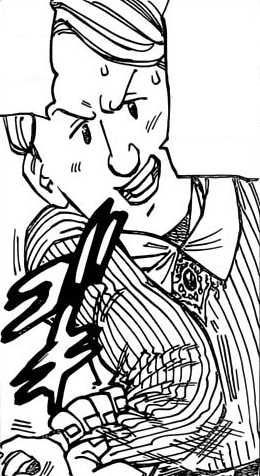 Daymond「デモンド」 is Escanor's older brother and prince of their kingdom. Daymond was the reason Escanor was exiled from their kingdom.

Daymond was a short kid with a bit oversized head and brown hair. He has shown to sport a frown look on his face.

Daymond, in a memory, was shown to be a selfish and bratty young boy who was jealous over the attention Escanor was getting from their parents and shown to bully and beat up Escanor when they were children.

Daymond was the king's only son and rightful heir to the Castellio Kingdom until Escanor was born and took his parents attention away from him making Daymond very jealous and furious toward Escanor. When they were children, Daymond started to bully and insult Escanor. He called him weak for getting close to their parents and beat him with a stick until Escanor unlocked his Sunshine powers and broke Daymond's arm.

This greatly shocked their parents of his monstrous power and caused them to disown Escanor, no longer calling him their child, even ordering their knights to kill him.

His fate remains unknown whether he lived or died after the barbarians destroyed the kingdom of Castellio.

Daymond is an ordinary human and does not possess any superhuman abilities.

Even though Escanor was Daymond's younger brother, he did not had any affection towards him. He would often bully and beat up Escanor due to his jealousy for the attention Escanor was getting from their parents. This caused Escanor's power Sunshine to awaken and he retaliated against Daymond which set off the chain of events that drove away the future Lion's Sin of Pride from the kingdom and led him to wander around Britannia until meeting Meliodas and Merlin.

Retrieved from "https://nanatsu-no-taizai.fandom.com/wiki/Daymond?oldid=152736"
Community content is available under CC-BY-SA unless otherwise noted.