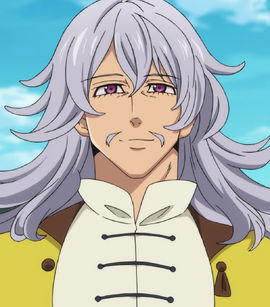 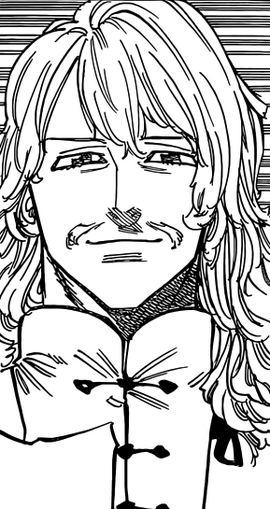 Deathpierce「デスピアス」 is a Holy Knight and a member of the Pleiades of the Azure Sky, who serve under the Assistant Great Holy Knight, Denzel Liones.

Deathpierce is a man with long silver hair and a mustache. He wears a yellow regal knight attire with blue gauntlets.

Deathpierce is polite and calm compared to his friends first noted as he politely requested a battle with Meliodas from King Bartra as to witness the strength of the Dragon's Sin of Wrath. Although, after the death of Denzel, he started to develop deep anger towards the Demon Clan after Derieri took his life and then the goddesses due to Nerobasta not keeping her promise to fight against both Derieri and Monspeet despite Denzel's sacrifice.

His emotions towards the Goddess Clan soon turned to fanaticism after Ludociel "gifted" him with strength using Breath of Bless to the point of talking down to Elizabeth who tried to explain the effects of the spell and pushed a female citizen aside beforehand.

After being freed from Breath of Bless, he abandoned his friends not wanted to remain in Liones where a demon and goddess was the King and Queen, his mindset now bordering on bias views desiring to create a kingdom for humans and humans alone.

Deathpierce was originally from Edinburgh, where at some point during his youth he befriends a small fairy who he named Invisible due to her being invisible to everyone but himself.

After the fall of Edinburgh, he was recruited by Denzel Liones and joined the Pleiades of the Azure Sky order of Holy Knights of Liones.

During the award ceremony held in honor for the Seven Deadly Sins sans Ban and King who were at the Fairy King's Forest, and Escanor still missing, Deathpierce and his two comrades, Dogedo and Waillo showed themselves after Meliodas called out to the Holy Knights who have doubts and complaints behind his back to step forward.

Deathpierce expressed his wish to the king that they face the legendary Seven Deadly Sins as to see their strength before their very eyes much to the other Holy Knights' surprise and protest but his request was granted by a reluctant Bartra Liones. He and Waillo then witness Dogedo battling Meliodas and later praised the Dragon's Sin of Wrath's impressive fighting instinct. When Dogedo was instantly defeated, Deathpierce caught his comrade with ease as Meliodas asked anyone next to fight him.

Satisfied, Deathpierce tells Meliodas that they've seen enough while carrying away an unconscious Dogedo revealing that his comrade lost a friend closest to him during a battle against Hendrickson before leaving with Waillo as Hawk read their Power Levels with Balor's Power Eye.

Deathpierce appeared to join his superior Denzel in a duel with one of the Ten Commandments Fraudrin that has been captured in a town nearby the borders of Kingdom of Liones. When Fraudrin using Dreyfus's technique Rakan on Denzel, Deathpierce delayed it with his power Melody. Failed to escape, Fraudrin revealed himself as a temporary member of Ten Commandments and acted as the substitute of the missing member, Gowther the Selflessness.

Even though both Deathpierce and Denzel were surprised after hearing Fraudrin's claim, they didn't let the demon to escape. However, the Perfect Cube spell that surrounded area was broken by a member of Ten Commandments that disguised as Dogedo the commandment of "thou shalt not kill" Grayroad. Angered Deathpierce calmed down by Denzel after he let them escape to avoid the effect of Grayroad's commandment.  After Dreyfus stabbed Deldry, hr attacked all of them with powerful magic, destroyed the entire tower and left.

Deathpierce goes along with the other Pleiades of the Azure Sky to Zeldon. While Deldrey is healed by a druid, Deathpierce receives along Denzel to the Holy Knights that come to discuss the situation of the Ten Commandments. There, Deathpierce receives Invisible who was sent by him as a spy and reveals that the Ten Commandments have killed all knights in the surrounding and take over the kingdom of Camelot. He also reveals that the great labyrinth in Vaizel was part of a Fight Festival orchestrated by the Commandments.

When the Ten Commandments finally invade Liones. When Derieri and Monspeet appear to finish with them, in view of no other exit, Denzel and Deathpierce intervene in the battle. Aware of Delzel's decision to sacrifice his life in order to save the kingdom, Deathpierce tries to convince him to retreat but Denzel affirms that he must do it. After declaring that he would kill the two Commandments, Denzel uses a spell to summon from his sword the goddess Nerobasta by offering his body to be Nerobasta's vessel which she inhabited.

Deathpierce ask Nerobasta to help them to defeat the Ten Commandments but is shocked by this one refuses. When Denzel/Nerobasta are killed by Derieri, Deathpierce break on tears.

After the battle, Deathpierce attends to the funeral of the knights who died during the battle and cries the deaths of Denzel and Dogedo.

Deathpierce is seen next to her companions during the fight against a group of demons. When two of the Four Archangels appear and kill all the demons, the Pleiades are the only ones to show discomfort for their presence.

During the banquet, the night after the formation of the alliance between Liones and the Four Archangels, Deathpierce and the Pleiades reveals to Ludociel their incapacity to trust on him and the Goddess Clan because of Denzel's death at Nerobasta actions. Deathpierce claims that the Goddess Clan does not have blood or tears, but Ludociel states that they are not unlike humans in that. In order to gain his loyalty, Ludociel uses his Breath of Bless to give the Pleiades some of his power but also manipulating their minds to turn them into his followers.

When the Holy War is unleashed, the Pleiades are part of the "Search-and-Destroy Force" must directly confront the Demon Clan army. On the way to the battle, Deathpierce roughly pushes off a civilian who desires him luck, worrying Invisible.

During the battle with the demon army, Deathpierce uses his Melody to deviate the attacks of the demons. Then, he uses his sword to cut off the head of an Orange Demon but is then punched by a Copper Demon. However, Deathpierce recovers unharmed, thinking that it grants to the power he receives from Ludociel.

After the battle was finished, Deathpierce starts to tell everyone that the power of the blessing makes them invincible and they can use it beat the demons. There, Elizabeth tells him and everyone else not to rely on that temporary power. She explains the technique known as Breath of Bless, also called Cheat Hope, pushes the persons magical and physical capabilities to their limits but the person loses their feeling of pain and tiredness and will continue to fight to their deaths. Deathpierce tells her she does not know what she is talking about, making Sariel intervene to tell him that he is actually the one who does not know a thing. He explains that Elizabeth spent most of the battle talking to the Demons and making them turn back around and avoid the fight. Deathpierce still questions the princesses abilities saying she was useless after all which causes Sariel to hush him. He explains despite the demons who have to follow Chandler and Cusack's orders, Elizabeth still managed to get dozens to lose the will to fight and turn around. Tarmiel then explains that Breath of Bless does not heal injuries and that Elizabeth was the one that was responsible for healing everyone's injuries.

Suddenly, a being falls from the sky in the middle of the battlefield, revealing to be Derieri. Deathpierce recognizes her as the one who killed Denzel, awakening a great fury. He thanks God for allowing him to have his revenge and attacks Derieri with his sword. However, the sword part in half without causing the slightest damage to Derieri who follows long without paying attention.

When Estarossa appears and unleashes his Black Hound on the battlefield, Arden is saved from the black flames along with the rest of the knights by Diane who takes them all underground.

On the way to Camelot, the group is ambushed by a new ordeal of Demons. During the fight, Deathpierce slash the feet of a Copper Demon.

18 months after the end of the Holy War, Deathpierce informs the other Pleiades that he has decided to quit being a Holy Knight, something he has been thinking about for a long time. The others ask him what he plans to do, to which Deathpierce says he will return to his hometown Edinburgh and dedicate his life to restoring it.[2] They ask him if there is no other reason, to which Deathpierce reminds them that the demons killed Denzel and the goddesses manipulated them, so he can no longer serve a kingdom with a demon and a goddess as king and queen. He declares that he will build a kingdom only for humans, and after this he leaves.[3]

As a Diamond-ranked Holy Knight, Deathpierce is believed to be very powerful. He is able to clash with Fraudrin alongside Denzel and overwhelm him.

Deathpierce wields a katana weapon he carries around.

She has been his friend ever since he was a child and he is the only one she will show herself to or speak with.

Retrieved from "https://nanatsu-no-taizai.fandom.com/wiki/Deathpierce?oldid=142317"
Community content is available under CC-BY-SA unless otherwise noted.