The Defensive Force「防衛部隊 Bōei Butai」 are a division of the allied forces of Stigma, the Holy Knights and the Seven Deadly Sins formed during the new Holy War, designed to protect Liones from the Demon Clan's attacks.

Before the imminent Holy War against the demons, Merlin took care to divide the allied forces to face them. The "Defensive Force" was designated to protect their base in Liones from the demons. The group is formed by the Holy Knights of Liones divided in four squads, one in each of the gates of the kingdom. The squad led by Dreyfus protects the south gate, Griamore protects the east gate, Jericho protects the west gate and Slader protects the north gate. Hendrickson was originally designed to guard the north gate, but he decides to join the Assault Force to follow Ludociel.

When the Demons attacked Liones, Dreyfus, Jericho, Slader and Simon have successfully defended their respective positions but Griamore faces serious trouble with a Silver Demon which prompted Dreyfus to rush to his son's aid and also awakened Full Size of the late Fraudrin as his secondary power, much to everyone's surprise. 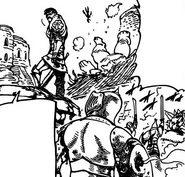 North Gate
Add a photo to this gallery
Retrieved from "https://nanatsu-no-taizai.fandom.com/wiki/Defensive_Force?oldid=140934"
Community content is available under CC-BY-SA unless otherwise noted.