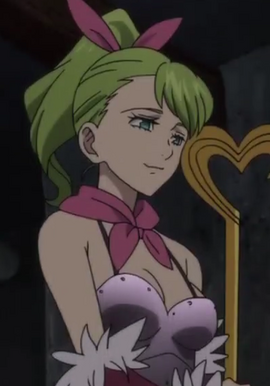 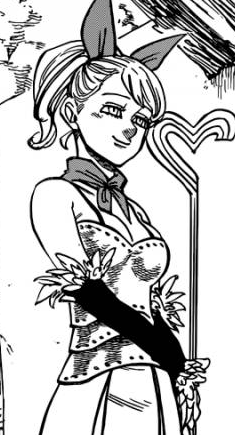 Deldry「デルドレー」 is a Holy Knight and a member of the Pleiades of the Azure Sky, who serves under the Assistant Great Holy Knight, Denzel Liones.

Deldry is a tall young woman with a slender figure. She has blues eyes and bright green hair that's tied into a ponytail with a red bunny-ears headband. Her attire, as opposed to the armor Holy Knights usually wear, consists of a metal purple strapped shirt along with a short skirt, black arm wears with blue frills, and a short red scarf tied around her neck. She also wears armor on her legs.

Deldry is seemingly confident, showing no expression of fear and confidently anticipating a coming battle with the former Great Holy Knight Dreyfus, despite knowing he is possessed by a demon. She is playful and has no hesitation in abusing her powers against others, even though it gets her in situations she'd rather not be in. Despite that, she was greatly disturbed of Waillo's flirting towards her about getting married.

When Fraudrin of the Ten Commandments enters a town nearby the borders of the Kingdom of Liones, Deldry and Arden anticipated his arrival while talking to each other about the Commandment who strongly resembles former Great Holy Knight Dreyfus and her partner expressed confidence that he won't be outclassed by the Seven Deadly Sins which she chided him before proceeding on carrying out Lord Denzel's strategy.[1]

Disguising herself with a cloak, Deldry approached Fraudrin while activating her Love Drive, telling him she's just a traveler which Fraudrin suspects. She asks him if he has forgotten her and proceeds to remove the cloak, revealing her identity which Fraudrin recognizes. Fraudrin attempts to attack her but attacks himself instead and after Deldry explains her power, The Great Holy Knight confesses much to her fancy.[2]

Several arrows then dart towards them which Fraudrin protects Deldry from however, one got to her which she scolds him for. To further strengthen her charm, she kisses him as another series of arrows transpire. This time, Fraudrin blocked them all. Arden then reveals himself which annoys Deldry while Fraudrin attacks the former, but Waillo steps in the way, pushing Arden towards Deldry who catches him. Waillo asks her if she thought of his proposal, and she responds weakly. After knocking Fraudrin out, Deldry teleports all of them along with the Great Holy Knight, completing their mission.[3]

After the team succeed to captured Fraudrin, they arrested him in a research tower owned by Denzel. Arden, Deldry, and Waillo ordered to guard the tower from the outside while Denzel tried to extract information regarding the Ten Commandments inside. Arden became bored as he played with the Incantation Orb and almost broke it after it slipped down from his hand.

When the situation became intense inside the tower, Dogedo suddenly appeared, telling the group that he came back after he finished his job to relieve the three from their post and to hand over the Curse Bead. Arden, Deldry, and Waillo using cart head over to Vaizel after being tricked by the fake Dogedo met the real Dogedo who wondered if the three's shift was already over. Panicked, the four headed back to the research tower only found that Dreyfus and Grayroad had already disarm the Perfect Cube that surrounded the tower. Dreyfus stabbed Deldry, later attacked all of them with a powerful magic, destroyed the entire tower and left. Deldry and the others are saved by Dogedo's Boost.

Deldry is taken by other Pleiades of the Azure Sky to Zeldon to see a druid to heal her injuries. While Deldry is healed, Arden screams his hate for Dreyfus for what he did to Deldry, causing her to be happy for his concern.

When Deldry recovers, she and Arden goes to hear Denzel notices about the Ten Commandments activities. When one of the Holy Knights's subordinates reveals herself as the princess Veronica Liones, Arden shows some interest towards her, receiving a hit from Deldry.

When the Ten Commandments invade Liones, the Pleiades of the Azure Sky helps to fight them. Deldry and the others stays inside the castle while Denzel and Deathpierce comes out to face the demons. When the Holy Knights come to evacuate the castle, is revealed that Denzel sacrifices his life. Angered, Deldry and the Pleiades affirms to Fraudrin that they would take revenge. Then, Grayroad appears having capturing everyone in the castle within her eggs to slowly turn them into servant demons. When Merlin appears and manages to defeat and captures Grayroad, Deldry is taken along with everyone in the castle in Merlin's Perfect Cube to see the battle between Meliodas and Fraudrin.

After the battle, Arden and Deldry attends to the funeral of the knights who died during the battle, and both cries the death of Denzel. There, Deldry agreed shot rocks to Hendrickson and Dreyfus claiming that they should be the ones who were dead because they allowed themselves to be manipulated by the demons. She is then stopped by Bartra, who claims that they must respect the souls of the dead.

Deldry is seen next to her companions during the fight against a group of demons. When two of the Four Archangels appears and kill all the demons, the Pleiades are the only ones to show discomfort for their presence.

During the banquet the night after the formation of the alliance between Liones and the Four Archangels, Deldry and the Pleiades reveals to Ludociel their incapacity to trust on him and the Goddess Clan because Denzel's death at Nerobasta actions. In order to gain his loyalty, Ludociel uses his Breath of Bless to give the Pleiades some of his power but also manipulating their minds to turn them into his followers.

When the Holy War is unleashed, the Pleiades are part of the "Search-and-Destroy Force" must directly confront the Demon Clan army. In the way to the battle, Deldry claims her desire to join the battle.

During the battle with the demon army, Deldry is seen killing a Blue Demon.

When the battle ends with the victory of the knights, Elizabeth argues with Deathpierce about the fact that they must think of those loved ones who pray for their safety, leading Deldry to think in Arden. When Estarossa appears and unleashes his Black Hound on the battlefield, Deldry is saved from the black flames along with the rest of the knights by Diane who takes them all underground.

On the way to Camelot, the group is ambushed by a new ordeal of Demons. During the fight, Deldry is beaten and knocked down, causing Waillo to help her without noticing the Orange Demon attacking them from behind, however both are saved by Elaine.

18 months after the end of the Holy War, Deathpierce informs Deldry and the other Pleiades that he has decided to quit being a Holy Knight, something he has been thinking about for a long time. Deldry and the others ask him what he plans to do, to which Deathpierce says he will return to his hometown Edinburgh and dedicate his life to restoring it.[4] They ask him if there is no other reason, to which Deathpierce reminds them that the demons killed Denzel and the goddesses manipulated them, so he can no longer serve a kingdom with a demon and a goddess as king and queen. He declares that he will build a kingdom only for humans, and after this he leaves.[5]

As a member of the Pleiades of the Azure Sky, Deldry is presumed to be more powerful than an average Holy Knight.

Deldry carries a staff with a heart design on the top.

Though the two are often fighting, they do have feelings for one another, though neither of them seem to realize that the other feels the same way.

Though she values him as a teammate, she is often annoyed by his constant marriage proposals.

Retrieved from "https://nanatsu-no-taizai.fandom.com/wiki/Deldry?oldid=153860"
Community content is available under CC-BY-SA unless otherwise noted.