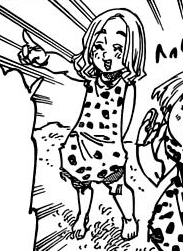 Della「デラ」 is the daughter of Zalpa, the man who saved Matrona's life after she was fatally poisoned by the Holy Knight Gannon. She lives with her father, her brother Sol, and Matrona, who she treats like her mother.

Della is a small girl with light hair. Similar to her father, she wears a spotted dress.

Sometime after Zalpa met and saved Matrona, he had Della with his now-late wife.

She now lives with her father, brother, and Matrona.

After Matrona rescues Diane from the Ten Commandments, she brings her back to Zalpa and his family. Della plays the tambourine while Matrona performs Drole's Dance. She's later seen with her dad as he's catching fish after teasing Diane of her poor performance of Drole's Dance

The next day, when fishing with his sister, Sol and Della are injured by a Blue Demon. Zalpa tries to mend their wounds, but fears they are too great, prompting Matrona and Diane to join the Vaizel Fight Festival in hopes of healing them.

After the festival, Della and Sol are healed by the princess Elizabeth Liones. Matrona decides to move with Zalpa and her children to the Fairy King's Forest to protect them from the demons and impending doom.

Della is a skilled musician, playing the tambourine for Matrona as she performs Drole's Dance.[1]

Retrieved from "https://nanatsu-no-taizai.fandom.com/wiki/Della?oldid=152724"
Community content is available under CC-BY-SA unless otherwise noted.