View source
watch 02:05
What is the Demon Clan?
Do you like this video?
Play Sound

The Demon Clan「魔神族, Majin-zoku」 is one of the five major races in the world of Nanatsu no Taizai.

According to the Lady of the Lake, the Demon Clan and their realm were created by the Demon King, after he was created by Chaos, alongside the Supreme Deity and the Sacred Tree.[1]

3,000 years ago, the Demon Clan constantly clashed with the Goddess Clan due to the bitter rivalry between their two rulers. Their elite group of warriors are the Ten Commandments, who were handpicked by the Demon King due to their power. Many demons consider themselves above those of other races for their great power, especially humans. However, the two legendary clans were largely evenly matched and thus a tentative balance was created. At some point in time, the Goddess Clan broke a treaty with them, and even slaughtered many women and children they were holding as prisoners of war.

At some point, the Vampires became allies yet subservients to the Demon Clan. When the leader of the Commandments, Meliodas, betrayed his own people for his alliance and relationship with the powerful goddess, Elizabeth, and severely crippled their strength by killing two members of the Ten Commandments when escaping, it indirectly caused two events: The Goddesses seized the opportunity to destroy the Demons once and for all, who waged a great war against the Goddess Clan after they allied with the Giant Clan, Fairy Clan and eventually the humans. The Vampire Clan decided to rebel during this time as the Demon Clan got weaker, but still got single-handedly defeated and sealed away.

As a result, the Demon Clan was ultimately defeated by the Goddess Clan and their allied clans, being sealed away in the Coffin of Eternal Darkness for many years. In spite of their fate though, a few demons managed to escape from or avoid the seal completely, namely a single Red Demon, a single Gray Demon, and Fraudrin of the Ten Commandments. The latter would spend sixteen years trying to find a way to break the seal and to resurrect his clan, so they could take over the land of Britannia.

The other nine members of the Commandments were eventually resurrected when Hendrickson manages to break the seal. Their biggest threat on their way to conquer the continent once more was in fact one of their own kind; Meliodas, their former leader and the oldest son and heir of the Demon King, who was still alive thanks to the Supreme Deity's curse of eternal life.

After organizing a fighting festival to lure Meliodas into a trap, they managed to kill him and begin the conquest of Britannia in the following month, taking the souls of every human they come across in order to regain their strength. However, when the Ten Commandments tries to conquer the kingdom of Liones, they are eventually stopped by the group formed with the goal of destroying them, the Seven Deadly Sins, as well as Meliodas who was resurrected due to his curse.

The remaining members of the Ten Commandments, Zeldris and Estarossa, took refuge in their established base in the kingdom of Camelot, where they sacrificed human souls in order to completely break the seal and liberate the entire Demon Clan. Eventually, the fearsome Cusack and Chandler joins them, as did Meliodas, who had decided to become the new Demon King to break the curse on him and Elizabeth after making a deal with his brothers.

When the Four Archangels of the Goddess Clan "revive" to join Elizabeth, the Seven Deadly Sins and the humans against them, the Demon Clan faces a new Holy War.

While the lower limbs of the Demon Clan fight on the battlefield, Zeldris, Estarossa, Cusack and Chandler face the united forces of the Seven Deadly Sins and the Four Archangels. Estarossa is then revealed as the fourth member of the Archangels, Mael, whose identity had been altered 3,000 years ago by the demon Gowther. After removing Mael from the madness caused by the Commandments he had absorbed, he joins the fight against Zeldris and the unified Original Demon. Although both are defeated, Meliodas, who had managed to absorb the ten Commandments, is converted into the vessel of the Demon King.

Finally, with the defeat of the Demon King, the remaining members of the Demon Clan withdraw from Britannia, thus concluding the Holy War. However, the Demon King manages to revive once again by taking Zeldris as his new vessel and plans to conquer Britannia himself as its new god. To save his brother, Meliodas travels with Elizabeth to Lake Salisbury to stop his father and nearly loses Zeldris forever until the rest of the Sins appear and help Meliodas to convince Zeldris to fight against his father, alongside Gelda who appears to help free her lover from the Demon King's grasp and force him out of Zeldris' body.

In a last-ditch effort to destroy his traitorous sons, the Seven Deadly Sins, Elizabeth and Gelda, the Demon King uses the Commandments to possess the ground of Britannia itself but the Sins combine their energy together to destroy his subsitute vessel and Meliodas destroys the Commandments forever by sacrificing his godly power to ensure his father can never return again, thus ending the fight once and for all.

While most of the Demon Clan returned to the Demon Realm, those who abandoned the battle during the Holy War enstablished a village on Dalflare Range.

Many of the Demon Clan members have monstrous appearances. Lesser Demons seems to be quite diverse, each kind with its own appearance, easily identified by colors, such as Red Demons or Gray Demons.

However, Demons of higher ranking have mostly humanoid appearances, namely the Ten Commandments or Meliodas. Though, there are exceptions, as in Grayroad's case. Human-like demons can be distinguished from Humans by their pitch black eyes and black markings on their skin. However, when not in possession of a Commandment, the Demon princes Meliodas and Zeldris possess green eyes.

Unlike humans, Demons have more than one heart. The number of hearts varies, although upper-level demons have seven hearts. The removal or destruction of a single heart does not incur death, although it is painful. Destroying all their hearts, regardless of their strength, will kill them.[2]

Some demons have black markings on their face, which vary from demon to demon. Because of its many uses, many demons find it convenient to keep their bodies or weapons cloaked in darkness constantly to various degrees, Demons that do such include members of the Ten Commandments Grayroad, Melascula, Derieri and Monspeet, as well as the highest-ranking demon Cusack.

Demons are capable of living 1000 years, having the second shortest lifespan of the five races, after humans.

Drinking the blood of a demon may give non-demons enhanced strength and magical power, if they are compatible. If they are not, they will explode. Demonic blood may naturally or forcibly turn the drinker into a demon themselves, a process that can be reversed either by removing their demonic plant or through the power of the Goddesses.

Destroying one of a demon's hearts

The Demon Clan is an extremely powerful race, only being on equal on power with the goddesses and being sealed by the cooperation of the latter with fairies, giants and humans. According to Chandler, a demon's power is at least two-fold greater at night.[3] 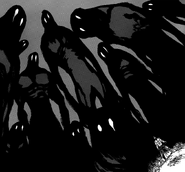 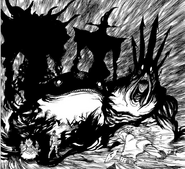 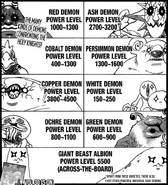 Demon Clan fighting against the Four Races 3,000 years ago.

The Demon Clan as they are described by Merlin