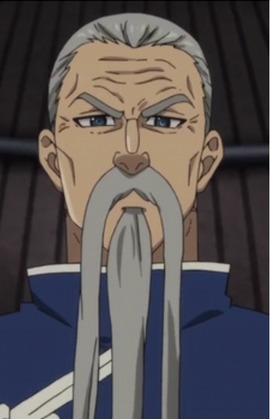 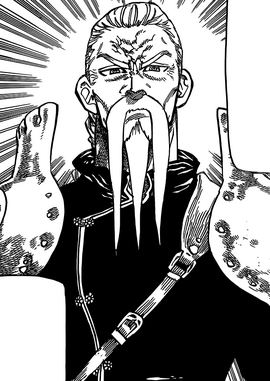 Denzel Liones「デンゼル・リオネス」 is the Assistant Great Holy Knight and Captain of the Pleiades of the Azure Sky. He is also the younger brother of King Bartra Liones.[1]

Denzel Liones at age 13
Denzel is a tall, muscular old man with blue eyes, long silver hair that is tied, and a distinguishing mustache and beard. As a Holy Knight, his attire is mainly armor with what seems to be a vestment underneath.

Denzel is an intelligent and highly alerted man, as he seems quite knowledgeable. He is also quite confident of his own strength, as he had taken on Fraudrin despite knowing he's a member of the Ten Commandments, without a single sign of fear.

He once ended up in the Forest of White Dreams and was lost for 3 days.

When Gowther was accused of violating and killing his sister, he attempted to kill him, but was stopped by Bartra.

Sometime ago he was exiled by Fraudrin who was in possession of Dreyfus' body from the Kingdom, and it was around then that he formed the Pleiades of the Azure Sky.[2]

Denzel is first seen within a secluded space where Fraudrin was brought, whom Fraudrin has recognized instantly as Denzel Liones. Planning to extract information regarding the Ten Commandments out of the demon, the Holy Knight soon engages in battle with the former, boasting about his ability as a human to fight equally against the fearsome Demon Clan. Fraudrin prepares to attack again but Denzel casts Dead Man Revenge upon him, causing the Demon to see the ghosts of those whom he had slain in the past. Fraudrin refused to halt, which caused Denzel to activate Judgement as well, Deathpierce soon joining the battle after casting Melody on the demon. Knowing his chances, Fraudrin decides to escape, but fails to do so as Perfect Cube was cast. When Fraudrin claims that he is not a real member of the Ten Commandments, Denzel tells him that he cannot deceive them, but was shocked after learning the true identity of the Commandment Fraudrin has substituted.[3] After the commandment of "thou shalt not kill" Grayroad interfere their duel by breaking the Perfect Cube, Denzel had no choice to let them escape to avoid being affected by Grayroad's commandment.[4]

Later, Denzel and the other Pleiades meets in Zeldon with the Holy Knights of Liones, Guila and Gustaf, who were accompanied by other soldiers. There, after receiving the information from an informant of Deathpierce, Denzel reveals to them the terrible condition in which Britannia is after the awakening of the Ten Commandments, that already had completely taken over the kingdom of Camelot and devoured the souls of hundreds of humans throughout the region. Waiting for an inevitable invasion in Liones, Denzel also reveals what Fraudrin had told him, that Gowther was a possible member of the Ten Commandments. In that, he also realizes that one of the subordinates of the Holy Knights is actually his niece Veronica. Denzel scolds her for intruding on the situation against his wishes and those of his brother, although this allows her to stay.

After a month, the Ten Commandments finally invade Liones. When the Holy Knights affected by the Love commandment were attacked by the soldiers affected by the Piety commandment, Derieri and Monspeet appear to finish with them. In view of no other exit, Denzel intervenes in the battle, having communicated to his brother and Deathpiearce, his decision to sacrifice his life in order to save the kingdom. After declaring that he would kill the two Commandments, Denzel uses a spell to summon from his sword the goddess Nerobasta by offering his body to be Nerobasta's vessel which she inhabited. As she realizes the return of the Demon Clan, she falsely accuses the human clan of releasing the seal provided by the Goddess Clan and refuses to fight and flies upwards, annihilating two demons on her way. She is then confronted by Derieri, whom Nerobasta recognizes as the Purity of the Ten Commandments. Confident in her abilities, Nerobasta uses Ark on her opponent, but in the end is no threat to the demon as Derieri defeats her with only one slice of her hand, surrounded with darkness.

After the battle against the Commandments was over, Denzel's corpse is veiled and buried with the other three knights who died during the battle.

As an Assistant Great Holy Knight, Denzel is very powerful. He was able to fight on par with Fraudrin, a member of the Ten Commandments, while he was using the body of Dreyfus, a former Great Holy Knight.[5] According to Monspeet however, Denzel's strength is compared to that of a slightly above average Red Demon.

Denzel is an extremely skilled swordsman, capable of trading even blows with Fraudrin who was in possession of Dreyfus' body.[6]

Denzel carries two swords that were said to have been blessed by the prayers of the Druids which possess the power to harm demonic beings.[8]

Within one of his blades dwells a goddess which he is able to summon after chanting a series of enchantments, then by offering his body as a vessel for her manifestation in exchange for his life, he gains a symbol in both eyes.[9]

Retrieved from "https://nanatsu-no-taizai.fandom.com/wiki/Denzel_Liones?oldid=153705"
Community content is available under CC-BY-SA unless otherwise noted.