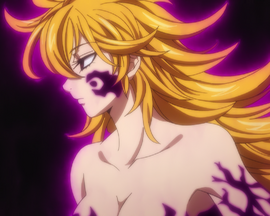 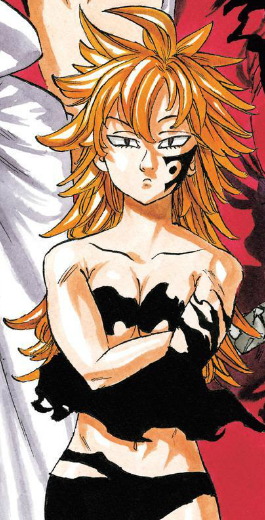 Derieri「デリエリ」 is an elite warrior of the Demon Clan, serving directly under the Demon King as the Purity of the Ten Commandments.

Derieri is a toned woman with long spiky orange hair. She wears no clothes, instead covering the breasts, left arm and right leg in her own darkness. She has demon markings on her left cheek which resemble a beast's open mouth with a circle in the center. Derieri lost her left arm in a fight with Sariel 3000 years ago and now uses her darkness to create one in its place.

Currently, after her battle with Nerobasta, her hair becomes significantly shorter and more tomboyish, mimicking her appearance 3000 years ago with the original Ten Commandments.

After defecting from the battle to conquer Britannia, Derieri temporary wore a black skirt and long sleeve open collar sweater with black boots.

Derieri has a laid back and nonchalant demeanor. She is usually calm and does not seem to be shocked by many events. She expresses laziness and boredom majority of the time. Though, Derieri has a very quick temper when certain buttons are pushed, such as her sister's death and when facing Meliodas. She has a very strange way of speaking, usually prefacing her comments with "To say from the ass"「ケツから言って ketsu kara itte」 or "Taking it from the ass". Which roughly means "long story short", "in other words" or "by the looks of it".

She harbors a great hatred towards the Goddess Clan, due to a situation where they broke a treaty and slaughtered her sister and many demon prisoners of war, and seeing one is one of the few things to change her normally apathetic demeanor. Going by her reaction to Elizabeth Liones she seems to especially hate Elizabeth, most likely for her role in her sister's death.

It was established that Derieri was once a different woman in the past. Monspeet stated that Derieri talked much more and was very open, but after her sister died she turned silent and taciturn.

After being treated by a human woman when she and Monspeet fell into her house by Meliodas' Full Counter, Derieri seems to develop a fondness for humans as she and Monspeet killed a bear causing disasters for the human's farmland while withdrawing from the battle and conquest of Britannia. She was visibly upset and hurt when Estarossa killed the farmland girl who sheltered them and tried avenging her after she was killed. As it turns out, the farmland girl had earlier "saved" both Monspeet and Derieri. Derieri is able to show remorse for a human that had tended to them. During her time with the humans and contemplating her past, Derieri has grown conflicted with her long-held convictions towards humans and goddesses, along with her loyalty to the Demon Clan. Derieri has eventually become more open and talkative like she used to be.

As a member of the Ten Commandments, Derieri fought in the ancient Holy War against the Goddess Clan and the other races.

After a horde of demons were imprisoned by Ludociel, Derieri alongside Melascula, Monspeet, Galand and Fraudrin, led an army of demons to Stigma's base. There they are confronted by the goddess Elizabeth, who wanted to stop the fighting between the Goddess and Demon Clans. When the goddess warns them about Ludociel's plans, Derieri refuses to believe her and demands that she release their companions. Elizabeth accepts even if they try to refuse, but when Derieri puts as an extra condition that she also must hand Meliodas to them, Elizabeth decidedly refuses, claiming that they can not continue to negotiate like that. At that moment Ludociel reveals all the demons captured within a giant Ark, including Derieri's sister, Derieri believes that Elizabeth was only gaining time and then watches in horror as all the hostages are killed. An angered Derieri knock Elizabeth down shortly before other two archangels appear to fight the Ten Commandments.

Derieri fiercely battles against them along with the other Commandments in an almost evenly matched fight, until Ludociel joins in, overpowering all of them by himself.

Without seeing another option, Derieri, along with Monspeet, decided to sacrifice six of their seven hearts to perform their Indura Transformation, being able to hurt Ludociel and the other Archangels with all their power unleashed. However, Elizabeth intervenes and uses her powers on the demons' Indura and purifying them, returning them back to normal with the help of two of the Archangels. When Ludociel attempts to kill them as they are defenseless, Meliodas stops him and proclaims to let them live. King tells Meliodas that they may end up coming after him one day but Meliodas brushes it off with a smile saying he will handle it when that time comes. Derieri is shown to be conscious and overhearing everything, blushing after hearing Meliodas' words.

Along with the rest of the Demon Clan, Derieri was sealed away by the Goddess Clan after losing the Ancient War against the other four races (humans, fairies, giants and goddesses).

As a member of the Ten Commandments, Derieri is exceptionally powerful. Like all members of the Demon Clan, she is able to utilize the mysterious jet-black power of darkness, as previously seen by Meliodas, to form wings for flight. Her aura, combined with the aura of the other Ten Commandments is so terrifying that it made the normally calm Hendrickson sweat in fear by their presence and unnerved Meliodas when he felt it from several kilometers away. Derieri was the first demon to showcase the power to devour the souls of the other races, leaving them as empty husks. Like Monspeet, she has incredible sensory abilities as only she and him were able to sense that the Ten Commandments were being watched by Meliodas' comrades from several kilometers away at Liones castle.

Derieri is extremely proficient in hand-to-hand combat, overwhelming someone of Meliodas' caliber and even breaking both his forearms with her ability, Combo Star. She also possesses the speed to outpace Meliodas with a sheer volume of attacks and hitting him quickly 54 times in a matter of seconds. She is also extremely durable, as she emerged completely unscathed after being hit by Tarmiel and Sariel's Omega Ark and later, Derieri's natural defenses were also shown to be exceptionally durable,as seen where she was completely unscathed by Deathpierce's Breath of Bliss enhanced sword strike,despite her being severely emotionally and psychologically weakened. She has extreme endurance, withstanding her arm being shredded and still continuing to pierce Sariel through the eye. [2] Also being punched in the stomach and having her rib cage smashed by Meliodas, as well as taking many punches from him.

The Demon King bestowed Derieri with the Commandment of Purity「 Junketsu」.[5] Its curse and activation condition are currently unknown.

Derieri and Monspeet seem to be very close, they are always in each others company, and he attends to her needs, such as allowing her to rest on his lap. It was also shown that despite her talking in very few words, he perfectly understood what she is thinking in full depth even if she does not go into detail and talks in a plain yet very awkward way. It is hinted that Monspeet has feelings for Derieri. It is also hinted she feels the same way. During her and Monspeet's fight against Estarossa, she was very protective of Monspeet, and was willing to fight Estarossa with him knowing her ability is useless. When Monspeet sacrificed himself for her, she was mentally destroyed and broken, proving how much she really loved and cared for him.

Derieri and Zeldris have a good relationship. Derieri respects Zeldris a lot and acknowledges him as a suitable leader. She follows his commands without a second thought. She is comfortable with him to the point in her trusting he would not do anything as punishment for her and Monspeet for leaving the Ten Commandments.

Derieri and Estarossa are fellow Commandments and have been teammates since the times Meliodas was the leader of the Ten Commandments. Derieri seems to have been aware of Estarossa being mentally unstable. Derieri viewed Estarossa as a strong member of the team as she was shocked when Escanor was able to beat him. Their relationship went sour after Estarossa killed Monspeet as well as trying to kill her.

Derieri strongly respected Meliodas when he was their leader, as she, like the other demons, believed he is worthiest to become Demon King. However, after he betrayed them, Derieri came to strongly resent him. Derieri did not care that he was killed by Estarossa and even attempted to pummel him herself relentlessly. During their second fight she fought him aggressively because of him betraying them and angrily called him a traitor. However, after being defeated by him she realized what he truly did for them, making her hatred against him to eventually recede. Later Derieri would admit that she was a fool for fight and hating Meliodas because she only wished she could have seen what he did earlier further proving her acceptance and like of him.

Despite Derieri and King being fated enemies, when Elizabeth is captured by Estarossa and Derieri wanted to go rescue her, making the entire alliance doubt her motives, King support her and ask his allies to trust her. During the rescue mission King thanks Derieri for the help, forming a temporary truce.

Derieri has a strong animosity towards Elizabeth due to the involvement of her original incarnation in her sister killing, to the point of attempting to kill her when she encounters her. However, after being defeated by Meliodas, Derieri finally admits that Elizabeth saved them back then and is actually good. She starts to trust Elizabeth after Monspeet's death, as Derieri turn up to her when she had no one and nowhere to go. She seems to be on good terms with her now, to the point of risking her life to save her from Estarossa. Derieri even promises to Elizabeth to save Mael for her sake, despite the fact he was the one who killed Monspeet. Elizabeth's kindness influenced her into becoming less belligerent. In her last moments, Derieri thanked Elizabeth for all what she had done.

Retrieved from "https://nanatsu-no-taizai.fandom.com/wiki/Derieri?oldid=154663"
Community content is available under CC-BY-SA unless otherwise noted.