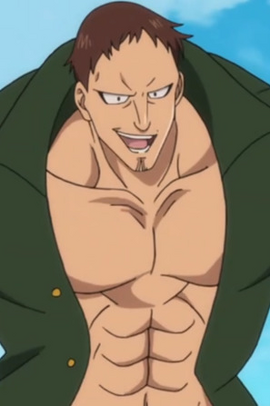 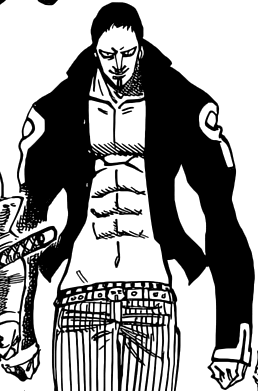 Dogedo「ドゲッド」 is a Platinum Holy Knight in the service of the Liones Kingdom. He is a member of the Pleiades of the Azure Sky, serving under the Assistant Great Holy Knight, Denzel Liones.[1]

Dogedo is a very tall and muscular man, with short cut hair, no eyebrows and a bit of a beard while wearing a open green jacket with no shirt underneath and strip jeans.

Dogedo appears cocky and arrogant, while believing that Meliodas isn't as strong as he appeared and rude toward Liones Holy Knights due to the failure of the previous Great Holy Knights.

During the award ceremony held in honor for the Seven Deadly Sins for saving the kingdom, sans Ban and King who were at the Fairy King's Forest, and Escanor still missing, Dogedo and his two comrades, Deathpierce and Waillo showed themselves after Meliodas called out to the Holy Knights who have doubts and complaints behind his back to step forward. After King Bartra Liones reluctantly granted Deathpierce's permission to fight the legendary Seven Deadly Sins to see if they are strong as proof in their very eyes, Dogedo volunteers, eager to face Meliodas but was surprised when Hawk, through Balor's Power Eye, read out his Power stats and questions the talking pig. Shrugging off, Dogedo readies himself for battle as he launched a series of lightning quick punch simultaneously which Meliodas easily dodged all of them before giving him a quick jab in the head that sent Dogedo crashing into the ground.

Getting up, Dogedo wasn't impressed of Meliodas' power and mocked the late Dreyfus and Hendrickson for getting the promotion of the Great Holy Knight after Zaratras died that they could never become Great Holy Knights on their own strength while expressing his desire to candidate himself for that rank, mocking Griamore in the process. Hearing Meliodas' principles, Dogedo retorts that a Holy Knight needs overwhelming power that crush all enemies as he launched another series of fast punches but ended up having broken hands by Meliodas' offensive and defensive block-and-parry seen by Deathpierce and Waillo. Refusing to give up, Dogedo attempted to headbutt Meliodas after the latter playfully insulted him that he should be demoted back to Apprentice Holy Knight but was sent flying by the Dragon's Sin of Wrath's simple palm strike on his forehead much to everyone's surprise. The Pleiades Holy Knight lost consciousness and his rolling body went flying backwards after Deathpierce caught him with ease as Meliodas asked anyone to fight him next.

An unconscious Dogedo was carried away by Deathpierce who revealed that his comrade lost a friend closest to him during the battle against Hendrickson while they were away at that time as they leave the scene.

When Dogedo was in a mission, one of the Ten Commandments is transformed into him to deceive Arden, Deldry, and Waillo who were guarding the research tower while Denzel and Deathpierce were in charge of a captured Fraudrin, causing them to leave the scene and deliver the orb to break the Perfect Cube around the tower. When the true Dogedo finds them, he is surprised by their presence, revealing that they had been deceived. Panicked, the four headed back to the research tower only found that Fraudrin and Grayroad had already disarm the Perfect Cube that surrounded the tower. After that Fraudrin stabbed Deldry, he latter attack all of them with a powerful magic, destroyed the entire tower and left. However, Dogedo manages to use his Boost ability to save the life of his companions taking them away from the range of the explosion

Dogedo goes along with the other Pleiades of the Azure Sky to Zeldon. While Deldrey is healed by a druid, Dogedo reprimands his companions to be fooled by Grayroad. He also states that they should not worry about Fraudrin, since the Judgement of Denzel would have him in a state of constant alertness.

One month after Melioda's death, Grayroad and Fraudrin has taken Liones Castle. Grayroad has become essentially a prison that are holding the castle residents hosts for demons in fluid filled eggs, which Fraudrin calls "The Grayroad Show". After Arden shoots two eggs holding two castle workers, they become demonic monsters. Ban attempts to use Fox Hunt to remove demonic plants like he has done previously, but does not work. Dogedo recklessly attacks and kills two of them despite Deathpierce's warning. Unexpectedly afterwards, he immediately shrivels up and dies. Grayroad then explains that anyone who kills someone in her presence shall die as well, thanks to her Pacifism Commandament.

When the battle at Liones ends, Dogedo is veiled and buried along with the other three fellow Holy Knights killed during the battle.

As a Platinum ranked Holy Knight, Dogedo is shown to be very capable when it comes to hand-to-hand combat; being able to launch several powerful punches at high speed to try and overwhelm the enemy with his brute strength. Though Meliodas complimented his abilities during their fight, Dogedo was quickly defeated by him easily.

Retrieved from "https://nanatsu-no-taizai.fandom.com/wiki/Dogedo?oldid=126008"
Community content is available under CC-BY-SA unless otherwise noted.