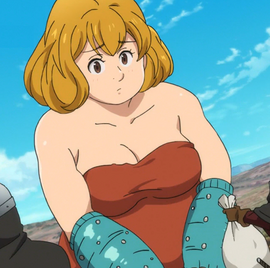 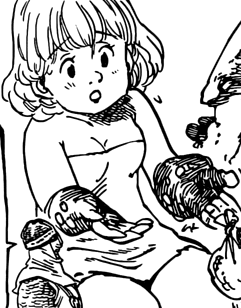 Dolores「ドロレス」 is a member of the Giant Clan and a friend of Diane.

Dolores was a chubby giant, wearing an old brown cloth along with a pair of boots.

Unlike other giants, Dolores was timid and shy, disliking battle and preferring to live a peaceful life, but wanted to be useful and accepted.

Dolores and Diane were trained by Matrona during their time at the Giant Clan, even taking several missions together. One evening, Diane overheard Matrona's plans to make Diane the strongest Giant warrior ever. Disliking Matrona's plans for her, Diane made up her mind to leave the village once more. She goes to find Dolores and run away with her, but Dolores declines. Dolores explains after much thought, the Giant's village is the only place where they'll ever be accepted, and that there was nothing to fear once you've been accepted. After Diane left for a while, Matrona made Dolores take a mission alone to fight a band of mountain bandits and Dolores dies during the mission.

As a member of the Giant Clan, Dolores is believed to be powerful with the affinity to use Creation but due to her meek and peaceful personality, she was seen as weak and undisciplined.

Retrieved from "https://nanatsu-no-taizai.fandom.com/wiki/Dolores?oldid=150289"
Community content is available under CC-BY-SA unless otherwise noted.