The Dragon Handle is a fragment of the Coffin of Eternal Darkness. It had been kept under Meliodas since the fall of Danafor and doubled as his primary weapon which he used in conjunction with Full Counter,[1] until it was taken away by Helbram to complete the Coffin's missing pieces and unseal the Demon Clan.

Sixteen years after the end of the New Holy War, it becomes Percival's primary weapon after Donny snatched it from the Holy Knight Ironside.

This sword has a broken blade attached to a green, dragon looking hilt. The hilt has two handles in the design of a twisted dragon which has three spikes on its head and on its back. The longer handle has the dragon's head at the end while the shorter handle has what appears to be a claw.

After being reforged by Howzer, its blade became that of a real sword.

The hilt of the sword is a fragment of the Coffin of Eternal Darkness, and, therefore, a key to the revival of the Demon Clan which was sealed away during the Holy War 3,000 years ago. This causes it to be part of a plot for the resurrection of the Demon Clan by Hendrickson, a Great Holy Knight of Liones.

The Handle, along with the other pieces of the Coffin of Eternal Darkness, were assembled in Danafor by the demon Fraudrin in an attempt to break the seal of the Demon Clan.[2]

Having acquired it after the destruction of Danafor, Meliodas, according to Ban, had never let go of the broken sword since joining Seven Deadly Sins. Once, before the assassination of Zaratras, Ban is intrigued by that fact and questions his captain. Not receiving a satisfactory response, Ban tried to steal it and was given a lasting wound by Meliodas, who used the broken sword as well as the enchantment Hellblaze.[3]

While in Dalmary Town, Meliodas, having been fatally poisoned by Dr. Dana earlier, suddenly regains consciousness when Golgius of the Weird Fangs tries to grab the sword from his hand. Releasing an aura powerful enough to scare the Holy Knight, Meliodas declares that he will not let go of the object even if he dies, and that this was the only way he can atone for his sins. His eyes are colored jet black, and his demon mark is present on on his forehead.[4]

Capital of the Dead arc (Manga only)

When Oslo blocks their way to the entrance of the Capital of the Dead, Meliodas slightly unsheathes his sword and creates an immensely huge ethereal dragon-like creature, which resembles the dragon on the sword's hilt, and scaring the creature away in lieu of letting Ban kill it. It also seems to be visible only to the Black Hound.[5]

When Veronica seals Meliodas in the goddess amber during the attack by the Holy Knights in Vaizel, the sword falls to the ground. Elizabeth grabs it as well as the goddess amber and yells at Veronica to bring Meliodas back. Veronica signals Griamore to trap Elizabeth with his magic power, Wall, and he obliges. Ban grabs Veronica and threatens to hurt her if Griamore does not release Elizabeth. However, Ban is attacked from behind by Jericho, and releases Veronica. Guila, who had arrived with Jericho, states that they have acheived their objectives and requests that Griamore release his magical ability. Elizabeth falls to the ground and Guila asks for her hand, but Veronica pushes Guila's hand away, stating that she will bring Elizabeth back to the kingdom herself and that Hendrickson's objectives are only that of Meliodas and the sword. Guila threatens Veronica to hand over Elizabeth, but is sealed with Jericho in Griamore's Wall. Elizabeth runs away with Veronica chasing behind her. Elizabeth steps on a mine planted by Guila, but Veronica sacrifices herself to push Elizabeth out of the way. Due to Veronica's fatal injury, Griamore's focus deteriorates and his magical ability is released. Guila attacks Griamore and picks up the broken sword which Elizabeth had dropped, asking the princess to cooperate. Elizabeth pleads Meliodas to help her and he breaks out of the goddess amber, with a black marks accross his body, as well as black eyes and a demonic presence. He takes the sword from Guila, her hand along with it. She expresses surprise and pain and Meliodas discards her hand. He waves the sword towards her causing a large blast. Meliodas flies to the location where Helbram and King were fighting and attacks. Meliodas is defeated by Helbram with the help of Hendrickson. The sword is stolen by Helbram while Meliodas is knocked out. Helbram detaches the damaged blade from its hilt, throwing the blade aside, and reveals that the hilt is a key to the revival of the Demon Clan.

Four Knights of the Apocalypse

Sixteen years after the breaking of the seal, the Holy Knight Ironside managed to gather the pieces of the Coffin, including the Dragon Handle. The last missing piece is found by Percival in the town of Sistana. After his familiar manages to obtain the final piece, Ironside starts the ritual to activate the Coffin pretending to use all people in the town as the sacrifice. However, Percival and his allies confront him to stop him. At the end of the battle, Donny uses his power to levitate the Coffin away from Ironside, allowing Percival to re-divide it. Donny manages to retrieve the Dragon Handle, while the rest of the pieces are collected by Mortlach who convinces Ironside to retreat.

After Howzer defeats the Ancient Dragon, Donny refuses to continue carrying the Dragon Handle because it would mean that Camelot's forces would pursue him, so Percival decides to charge it in his place. Howzer then repairs its blade to turn it into Percival's sword.

The hilt of the sword, the fragment of the Coffin of Eternal Darkness, displayed the ability to create an immensely huge ethereal dragon-like creature, that resembles the dragon on the other side of the hilt, and seems to be visible only to the victim.[6]

The handle of the sword preparing the illusion 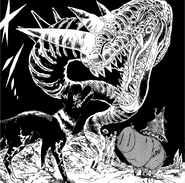 Dragon Handle in the seal to the Demon Clan 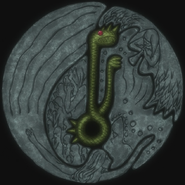 The sword in the original oneshot.