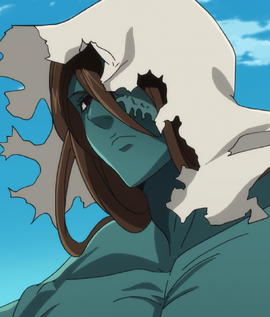 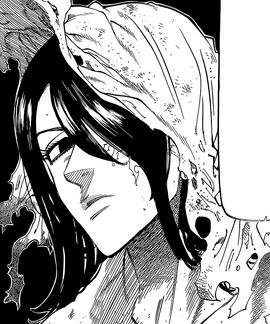 Drole「ドロール」, also known to humans as Balor「バロール」, is recognized as the founder of the Giant Clan, their former King and a god by some, according to the clan's legends. He later defected to be an elite warrior of the Demon Clan, serving directly under the Demon King as the Patience of the Ten Commandments, but ultimately left and returned to affiliate with his previous clan.

Drole as a child
Full Visual

Drole is a massive giant, towering over other giants such as Diane and Matrona. His skin is light blue, and he has four arms, with the normally positioned pair each having an arm band. He wears tattered orange pants with skull patterns on the lining, and has a tattered orange bag covering his head. He also has brown hair. He is missing his left eye, now having only scar tissue covering the socket. This feature is usually covered by his bangs. When he was a part of the Ten Commandments, his demon mark was located on his butt.

When Drole was freed from the Coffin of Eternal Darkness, his entire body was incredibly malnourished and hunched down before he gradually regains his full strength and proper posture after absorbing enough magic power as time passes by.

Drole is a calm individual who rarely speaks but when he does, he does so politely. He appears to believe greatly in fate and putting everything you have into battle. Being a giant, Drole possesses a great deal of warrior pride as is noted by giants that in battle it's shameful to flee for whatever reason. He proves his adherence to this principle by choosing to side with the Ten Commandments after Zeldris defeated him quite easily and was shocked that Diane chose to flee instead during her trial.

After seeing how Diane's love made her stronger than the combat power most giants valued, Drole eventually saw the errors in the way he ruled the Giant Clan into becoming nothing but warriors. He then acknowledged that choosing either victory or death in battle was actually cowardly itself as the giants under his rule simply didn't have the courage to retreat when necessary. For this, he believed that Diane can make the Giant Clan prosper again and thus choose to become her shield, appointing her to be the new Giant queen.

Despite his stoic demeanor, Drole still does have a humorous side, as shown when he bursts out laughing at Gloxinia's impersonation of Meliodas.

According to the myths of the giants, Drole was a highly respected ancestor of the Giant Clan, having developed a sacred dance with deep connections to nature and earth.[3] Since his childhood, Drole was isolated from his clan for his abnormal size, mysterious eye, four arms and blue skin. Despite this, since the Giant Clan values the strength above all things, they celebrate Drole as the Giant King. During the Holy War, he fought alongside both Gloxinia and Meliodas as members of Stigma in order to defeat the Demon King and once prove to be the most powerful warrior of all. But his pride was shattered after easily being defeated by Zeldris. [4] This humiliation, lead to him siding with the Demon Clan, and even becoming a demon himself, as one of the Ten Commandments.

He was eventually sealed away along with the rest of the Demon Clan, by the Goddess Clan after losing the Ancient War against the other four races (humans, giants, fairies, and goddesses).

As a member of the Ten Commandments and a legendary warrior of the Giant Clan, Drole is extremely powerful. After receiving a Commandment from the Demon King, Drole obtained powers related to the Demon Clan, like their unique power of darkness, similar to Meliodas' at Vaizel. He is capable of utilizing this dark power to form helicopter-shaped wings for flight.[5] His aura, combined with the aura of the other Ten Commandments is so terrifying that it made the normally calm Hendrickson sweat in fear by their presence and unnerved Meliodas when he sensed it several kilometers away. Matrona, upon first encountering his labyrinth could sense his power in the center, miles away, and noted how extraordinary it is.[6] Futhermore, Drole with Gloxinia help is also powerful enough to go toe-toe with Chandler the highest-ranked Demon when he is using his full power and hold their own against him for a short amount of time.

Owing to his great size and physical strength, Drole has an incredible physical constitution and endurance, being able to get up and begin fighting Meliodas almost immediately after taking a massive attack from Escanor head on, which was capable of destroying the giant boulder that crushed Vaizel, and threw him through his own labyrinth.[7] He is able to endure attacks from Meliodas with his Demon Mark activated and showing no outward reaction from having his arms cut off or standing completely unfazed while allowing Diane to land multiple direct attacks all over his body with Gideon.

Being the largest giant so far in the series along with being their former king, Drole possesses the greatest amount of physical strength of giants being able to send Diane, another giant, flying away a considerable distance with just the heel of his palm even when she increased her weight with Heavy Metal. He was also able to easily incapacitate her with just one of his palm strikes when her Heavy Metal was dissipated by him which is considerable as she was able to remain conscious and continue fighting even when wounded by multiple Great Holy Knight level opponents before.

Despite his enormous size, Drole also has great speed and agility as he was able to effortlessly dodge Diane's Crazy Rush all the while performing his sacred dance that dissipated her magic.

Drole was bestowed with the Commandment of Patience「 Nintai」 by the Demon King. The effects of its curse are currently unknown.

He and Meliodas were once comrades-in-arms before he and Gloxinia joined the Demon Clan.[8] Even in battle the two can calmly speak to one another, and Meliodas is known very well to be cautious of Drole's "Magical Eye". He said Meliodas was strong enough that if he wished, he could claim the throne of the Demon King for his own.

Later on in the latter, Drole's dying wish was to speak to his old friend, Meliodas, once more.

Gloxinia and he paired up when the Ten Commandments spread out to take over Britannia so they seem to get along well. He has been very accommodating to his plans for a "fighting festival", building a labyrinth and setting the stage even though he seems to consider the entire affair as imitating humans and playing around. Drole seems to care for his fairy comrade as he protected him from Meliodas during their fight, notably by gathering an injured Gloxinia in his hand and protecting him against Meliodas' Kami Chigiri using his Heavy Metal even though Drole was himself injured. The reason for this closeness is that they were comrade-in-arms before becoming demons, having fought together against the Demon King before changing sides.[9] Drole considers Gloxinia a small one who likes to mess around, but at the same time sees him as a partner he can trust and count on.[10]

Despite originally being his enemy, Diane made an impression on Drole. During the Great Fight Festival arc, Drole originally had no opinion of her whatsoever, but later during the festival he was impressed by how she was able to defeat his golem during the festival with golems of her own, and noticed her deep connection to nature and the earth. Long after the festival, he and Gloxinia approached Diane and King respectively, took them both and told them of their intent to betray the Ten Commandments to train them as their successors, after which they briefly fought and sent them both to the past as part of their trial. During the trial, Diane learned much about Drole, the holy war, and his past decision to join the Ten Commandments, and in turn Drole watched her during the trial and was not only glad she passed the trial, but was shocked by Diane's decision to flee instead of joining the Commandments, a decision Drole himself admitted he never would have thought to have make back then.

After seeing this and seeing how Diane's love made her stronger than the combat power most giants valued, Drole eventually saw the errors in the way he ruled the Giant Clan into becoming nothing but warriors. He then acknowledged that choosing either victory or death in battle was actually cowardly itself as the giants under his rule simply didn't have the courage to retreat when necessary. For this, he not only befriended the giant girl, but came to greatly respect her, so much, so he believed that Diane can make the Giant Clan prosper once again and thus choose to become her shield, and he helps her escape during his fight with Chandler. He even used his final words to her to appoint her to be the next ruler of the giant clan and proudly stated his intent to protect the new "Giant Queen".

Retrieved from "https://nanatsu-no-taizai.fandom.com/wiki/Drole?oldid=151669"
Community content is available under CC-BY-SA unless otherwise noted.