Istar
The Druids are a clan of humans who have powers related to light and often live deep within the forests of Britannia.

Druids mostly are a forest dwelling people who worship the Goddess Clan while despising the Demon Clan, although Meliodas seems to be the exception for being an ally. Some of them act like priests in marriage celebrations. They are insular due to living away from most other people, but are referred to as the philosophers and sorcerers of the forest. When a person dies, it is customary for them to guard the buried corpses to prevent any possession from evil spirits.

The druids have many secret techniques, although condemned, like the Acid power for its corrosive properties despite its diverse uses. Some techniques include:

Throughout the story, numerous seemingly unintelligible spells have been either taught to by or cast by a druid.

Taught to Veronica Liones by Hendrickson and used to seal Meliodas in the Goddess Amber.[1]

When Ardbeg used an Amber of the Four Archangels to seal some Demons, he used a slight variation of the spell.[2]

Used by Hendrickson to awaken the demon blood in the new generation Holy Knights.[3]

Sends the target into their memories[4] or to send others into the target's memories[5]. Used by Zaneri to transfer Meliodas into his own memories for his trial and by Zaratras to enter Meliodas' memories.

An alternate version is used by Gloxinia and Drole to transfer King and Diane into their memories and relive their past. It was taught to them by Elizabeth of the Goddess Clan.[6]

Used by Jenna to release Meliodas's darkness from the Goddess Amber and return it to him.[8]

Used by Denzel Liones to summon the Goddess Nerobasta and manifest her within his body.[9] 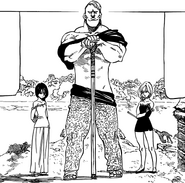