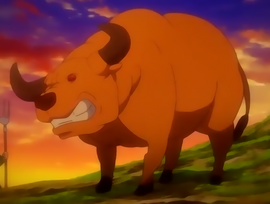 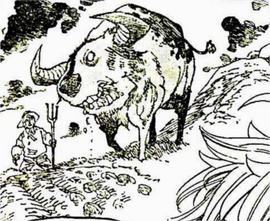 Dusk Bison「」 are humpbacked wild oxen, active mainly at night and around dusk.[1]

In Grand Cross mobile game, two variants are introduced: one with yellow fur and thorny, upright horns; and one with brown fur and large hooked horns. They are notably more detailed than in the anime.

They are wild creatures who act as pests, attacking and destroying human farms, mainly at night and around dusk.[2]

A dusk bison is mentioned to be acting as a pest in Bernia by Meliodas, who intended to catch it and use it for a meal in Boar Hat.[3]

Nothing is known about these creatures' abilities, except that they are strong enough to destroy human farms. [4]

Retrieved from "https://nanatsu-no-taizai.fandom.com/wiki/Dusk_Bisons?oldid=145890"
Community content is available under CC-BY-SA unless otherwise noted.