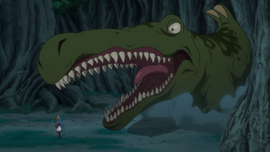 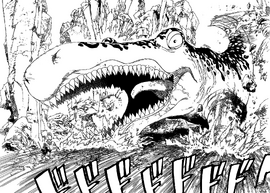 Earth Crawlers「アースクローラー」 are massive creatures that can be seen in various locations. Premature ones are called Sand Crawlers「サンドクローラー Sandokurōrā」.[1]

Sand crawlers are chubby, fish-like creatures with teeth and jaws, and dark artistic backs. They are around the size of Hawk. As they mature, they are more crocodile-like and can span hundreds of feet in length.

They can dig underground and catch their prey from below, eating anything they could fit in their mouths. Matured ones are able to eat big things like giants, buildings, and Tyrant Dragons.[2] They coat themselves in mucus to moisturize their skin and to protect against physical attacks.[3]

A little Sand Crawler appears in the maze during the Fight Festival in Vaizel and bites Hawk's nose. However, Hawk quickly devours the entire Sand Crawler, activating his Transpork ability in the process. There, a large Earth Crawler emerges and attack Diane, Hawk, Elizabeth, Howzer and Gilthunder. Diane and the two Holy Knights manages to defeat it, just for another one to appear. However, Gilfrost arrives and freezes the Earth Crawler.

Retrieved from "https://nanatsu-no-taizai.fandom.com/wiki/Earth_Crawlers?oldid=146316"
Community content is available under CC-BY-SA unless otherwise noted.