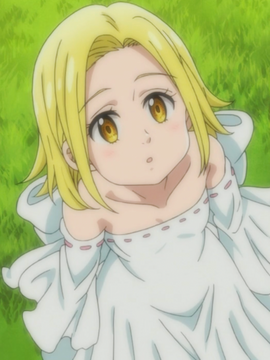 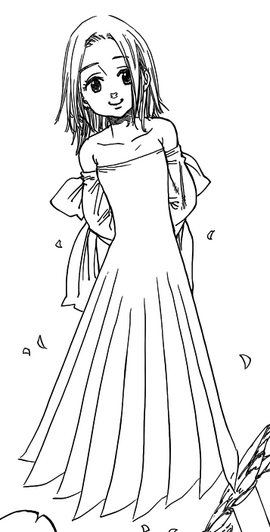 Fairy Clan
Fountain of Youth
Capital of the Dead (former)

Holy Maiden of the Fountain of Youth (former)

Elaine「エレイン」 is an elite Fairy warrior who held the duty of the Fountain of Youth's Holy Maiden. She also is the younger sister of the current Fairy King, Harlequin. Though killed by a demon after giving up the fountain to Ban, Elaine is later temporarily resurrected by Melascula and dies a second time after fighting the Demon Clan in the new Holy War, but is then fully resurrected by Ban who gives up his immortality.

Elaine, after her resurrection

Elaine, with clothes given by Escanor

Elaine's wings
Add a photo to this gallery

Elaine is a slender pale-skinned female with a very petite frame. She has neck-length blonde hair, big golden eyes and long, thin eyelashes. Despite being around 1000 years old, Elaine intially resembles a human child. When her large and elegant wings finally grew in, her appearance became more mature and her hair lengthened. However, she returns to her former appearance if her magical power is completely depleted.

As the Holy Maiden, Elaine wore a single white one-piece strapless dress tied together with a butterfly knot at the back. It also had long detached sleeves.

When revived by Melascula, Elaine wore a fancier revealing red gown (black in the anime), along with shoes out of red leaves.

After her official revival, Escanor gave her a forest green tavern gown she wore from then on with a pair of red slippers.

Like her older brother, Elaine was initially distrustful of humans due to the repeated attempts to steal the water of the Fountain of Youth with malicious intent. This changed after she met and began trusting Ban by reading his heart, even developing feelings for him as a result. Like Elizabeth, Elaine is a very harmonic, curious and open-minded individual, noticing differences but respecting them due to thinking all things and beings and their properties complement each other.

Elaine has shown to be a very kind, caring girl who tends to put others' well-being before her own. This was shown when she passed most of her life inside the Fairy King's forest for her people's safety even if it wasn't her duty and wanted to be traveling around the world. She is willing to forgive King for abandoning their people but initially was both disappointed and unhappy for his actions. Furthermore, Elaine even almost sacrificed her second chance to live for the Four Races' safety, only not doing so after Merlin found a calmer solution.

Due to Ban's encouragement in trying out ale, Elaine becomes quite angry, bashful and easily embarrassed while drunk, sharing these traits with King.

After being revived by Melascula via her demonic magic, Elaine became darker and hostile to anyone spent time with Ban regardless if they are friend or foe, though she eventually returned to her innocent nature after expelling the demonic influence thanks to Jericho and Ban.

Elaine was born into the Fairy Clan, being the younger sister of the chosen to be the third Fairy King, Harlequin​​​​​. Like her brother, Elaine has born from the Sacred Tree of the Fairy King's Forest. Unlike most fairies though, the siblings hadn't come out their wings due to being powerful late bloomers. They lived peacefully inside the Forest for centuries, thus sharing a close relationship with the other high-ranked fairy, Helbram.

Seven hundred years ago though, Harlequin(King) abandoned the kingdom[2] to going out and save Helbram and other Fairies, thus forcing Elaine to become the Fountain of Youth's Holy Maiden, live hundreds of years of solitude, and preventing her from leaving the Fairy King's Forest.[3] As time passed, Elaine came to distrust humans as an aging king who dreamt of ruling forever sent an army to invade her country; a merchant who dreamt of endless riches and attempted to steal the Fountain of Youth from her; and finally a savage tribe attempted to burn the Fairy King's Forest down with her but all of those attempts were thwarted by herself.

At some point during her life, Ban, then known as Bandit Ban, wanting to gain immortality, climbed the gigantic tree, in the Fairy King's Forest, where the Fountain of Youth was located. Elaine, thinking that he, like all other humans who desired immortality, had malicious feelings, quickly blew him off the tree with her wind manipulation abilities. He, still being alive, persistently kept climbing up, and she, kept blowing him off, with the actions of each angering and annoying the other. As Ban then removes his three-section staff and prepares to fight her, she also does so. Seemingly attacking her, Ban then manipulates his weapon to instead grab the cup which has the water from the fountain, surprising Elaine. Before he could drink it, she immediately immobilizes him with the branches of trees.[4]

Elaine then tries to explain to him that without the fountain, the forest would die, and soon realizes, by reading his mind, that he has no malicious feelings, and unbinds him. Some time later, after asking him his name and the reason he wants immortality and receiving the answer, she informs him that she had been protecting the fountain for seven hundred years in the place of her brother, to which he responds, commenting that it must have been "boring as hell", and irritating her. When he then proceeds to leave the forest, she is seen dejectedly expressing her desire for him to have stayed there for a longer time. However, he soon comes back up and says that he had gone down to get his Ale collection book, which he had dropped when he was blown away by Elaine.[5]

During the next seven days, both of them become good friends, often exploring the forest, training, drinking and even bathing together, with Elaine even starting to have feelings for him. Sometime later, when Elaine states her desire to go out of the forest with Ban, he hears her and questions her if she actually wants to do so, and as she tells him to not make fun of her, responds, saying he is serious and that he doesn't get along with people particularly well. She, however, denies his offer, explaining that she had to protect the fountain, leading him to then offer to find her brother and bring him back, which will relieve her of her duties and allow her to go of the forest. Hearing that, she hugs him, which surprising him.[6]

Just then, a demon from the Demon Clan started burning the Fairy King's Forest with its purgatory fire. Ban instructs her to take the fountain's cup and escape, and then uses his three-section staff to remove the demon's heart. She, however, tries to stop him and inform him that demons have multiple hearts; the demon then immediately and fatally wounds both Ban and Elaine with its claws. In desperation, she makes him drink the water through her mouth, since he did not have the strength to drink it himself, thus making him immortal. After the demon is defeated by the now-immortal Ban, and the whole forest burns due to its purgatory fire, a dying Elaine gives him an almoca leaf, which is the forest's last seed, asking him to plant it somewhere. Ban then tries to declare that he will definitely "make her his", but is cut off by her death.[7]

While alive, Elaine was powerful enough to protect the Fountain of Youth by herself in her brother's place. According to Zhivago, the Holy Maiden was capable of overpowering an entire army of Holy Knights. Like her brother, Elaine's power increased incredibly after her wings grew, which allowed her to further aid Elizabeth and the Sins against one of the Ten Commandments.

King is Elaine's brother and was the king of the Fairy King's Forest. Elaine was upset at King for leaving her alone to protect the Fountain of Youth but was willing to forgive him and asked him to save Ban. And Elaine forgave her brother for leaving her 700 years alone, later on the manga and the anime.

Initially thinking that he was a typical bandit with malicious intentions, Elaine tried to kill Ban, but soon understood that he had no such intentions upon reading his heart. She later came to befriend him when he stayed at the Fairy King's Forest for a week, even starting to have feelings for him. With Ban and Elaine rapidly dying after fighting a demon, she sacrificed herself by giving him the Fountain of Youth (via a kiss). While dying in his arms, he promised her to make her his, and she gave him the last seed to restore the forest. At the Capital of the Dead, she saved Ban from being turned to stone by King. After their reunion, he again promises to make her his. After finally being revived, Elaine attempts to kill Jericho, jealous of how she took her dream of traveling with Ban. After Ban reassures her that she's his only woman, she calms down and apologizes for her actions. After Escanor defeats Galand and Melascula, Elaine and Ban are happy to finally reunite, with Jericho's encouragement.

Since Elaine was watching over Ban through the Capital of The Dead, she soon learned of Meliodas and Elizabeth. Elaine took a liking to Elizabeth because of her kind personality and when the two finally meet, they automatically become friends. They develop a respect for each other and even talk about their respective love interests. Elaine admits she finds Elizabeth something special. A month after the fighting festival, Elizabeth, Diane and Elaine are seen having a girl's day in and visiting Elaine's bedside while she stays in her serious condition and even heals her when her condition worsens. They even fight alongside each other quite well when Elizabeth's memories of her past lives begin to return.

Although barely knowing each other, both Fairy and Holy Knight immediately got off on the wrong foot the moment they first met due to Jericho's feeling's for Ban. Elaine had been watching over Ban through the Capital of the Dead and grew jealous of Jericho and Ban's relationship because of Jericho traveling with Ban and it being always Elaine's dream to travel with Ban. After both girls squabble and Ban fights both Melascula and Galand, Jericho carries both Elaine and Ban to safety until reaching Escanor's tavern. After Jericho's act of bravery, Elaine and Jericho's relationship seemed to have improved. In the special chapter, the relationship grows to the point both girls can even talk about things such as undergarments.

Retrieved from "https://nanatsu-no-taizai.fandom.com/wiki/Elaine?oldid=142621"
Community content is available under CC-BY-SA unless otherwise noted.