Start a Wiki
watch 02:11
Who is Elizabeth?
Do you like this video? 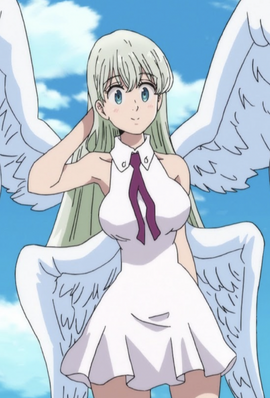 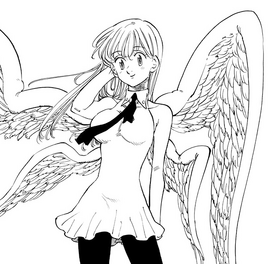 Elizabeth「エリザベス」 is one of the highest-ranked members of the Goddess Clan and the Supreme Deity's daughter. She also is the original incarnation of Elizabeth Liones, as well as Meliodas' lover 3,000 years ago. Due to her helping members of the Demon Clan in the Holy War and by falling in love with one of them, Elizabeth was punished by the Demon King with a curse to reincarnate as a human and losing her memories, dying over and over again.

Elizabeth's full appearance
Elizabeth looks identical to Elizabeth Liones, except for a shorter fringe and with two pairs of wings on her back, the second pair smaller than the first. Her eyes are blue but manifest the symbol of a triskele in both her eyes whenever she uses her powers.

Elizabeth often wears a dark maroon tie over a white collared sleeveless dress that exposes her back, along with black leggings (removed in the anime) and cloth shoes adorned with a ribbon.

In her fight against her mother and the Demon King with Meliodas, Elizabeth wore dark pants with a dark top with buttons vertically coming down from the neck.

Elizabeth is an extremely benevolent individual, who prefers a more peaceful approach and doesn't enjoy fighting. She showed intense compassion for the Demon Clan, weeping over the lives of demons killed by Ludociel and purifying Derieri and Monspeet despite being aware that the Supreme Deity wouldn't forgive her for such actions. However, Elizabeth would do about anything for Meliodas as he is everything to her, even proclaiming she would fight five members of the famed Ten Commandments by herself if they planned on killing him. Her bravery was shown when she fought against her mother and the Demon King at Meliodas' side, even though they didn't have the power to defeat them.

Being related to the Deity, Elizabeth knew the Four Archangels since a young age. She was very close to their leader Ludociel's younger brother, Mael, feeling sorry to see his great loneliness and rejection, and encouraging him to be who he is and wants to be. When the Holy War occurred, Elizabeth became a feared warrior and was dreaded by the Demon Clan for her combat skill, earning the feared moniker of Bloodstained Ellie for the slaughter she inflicted upon her opponents.

At some later point while flying above the sky at the end of a battle, Elizabeth met the Demon King's oldest son and leader of the Commandments, Meliodas, who was in the nearest mountain. They eventually knew each other well during their clans' brief peace by reuniting in secret on the abandoned remains of Heaven's Theater, telling their wishes and lives with family, with Mael being the only one who knew. This lead to the two to eventually fall in love with each other.

At some point, she met Merlin as a child and became very close to her, considering her like a younger sister and looking after her after her home of Belialuin was destroyed.

Despite her opposite nature to the Demon Clan, Elizabeth wanted to find a way to stay in peace with them and always rejected the idea of a Holy War, which Meliodas also wanted to stop, without knowing the severe consequences. Meliodas to betray the Demon Clan for her, starting the Holy War which she fought alongside him and their close friends, the kings Gloxinia and Drole as members of Stigma, an alliance of the Fairy, Giant and Goddess clans to fight the Demon Clan.

Shortly after the soul of King and Diane are sent back in time to inhabit the bodies of Gloxinia and Drole, Elizabeth appears before the two of them and Meliodas, preparing to go to the Valley of Fossils, which was under attack by an army of demons.

While Gloxinia, Drole, and Meliodas fight the Ten Commandments member Calmadios, Elizabeth confronts the lesser demons and talks to their inner hearts, convincing them to retreat.

After that, together with the rescued humans, go back to the Fairy King's Forest, where the Stigma headquarters lies. Elizabeth then hears Ludociel speaking of his plan to exterminate the demons to the other allied clans. Hoping for a peaceful solution to the war she tries to talk the archangel out of his plan, but to no avail.

Mere minutes after their argument Ludociel's plan begins to come to fruition, when an army of demons led by five of the Ten Commandments approaches the forest. Elizabeth flew to them and try to stop their advance by speaking with the demons. She then discovers from Monspeet that tens of thousands of demons have disappeared and that their magical power can be sensed from within the forest. Elizabeth promises to try to negotiate with Ludociel for their freedom, hoping for the demon to retreat before Ludociel can enact his plan. Derieri, however, puts another condition to their retreat: to have Stigma hand over Meliodas to them, a condition that Elizabeth refuses. After the unsuccessful end of her negotiation with the demons, Elizabeth looks in horror as Ludociel enacts his plan, showing the hostage demons trapped into a giant ark and then killing them. She is then knocked to the ground by Derieri shortly before other two archangels appear to fight the Ten Commandments. To prevent Elizabeth from interfering with their fight against the Ten Commandments, they trapped her in an Ark Barrier. Soon after, Meliodas, Diane (as Drole), and King (as Gloxinia) arrive. Meliodas frees Elizabeth from the Ark, damaging himself. Distraught by the deaths of the demons, Elizabeth flies up to where the Archangels and the Ten Commandments are facing off and orders Ludociel to stand down. She then uses her powers on the demons' Indura and frees them, returning them back to normal with the help of two of the Archangels Tarmiel and Sariel, who acknowledged not only her power but her reasons to fight.

As a result of the forbidden spell used by Gowther, the memories of Elizabeth about Mael were altered to believe that he was Meliodas's younger brother "Estarossa" and the one who kill Mael.

During the last days of the war, the leaders of the Demon and Goddess Clans, the Demon King and the Supreme Deity, respectively, furious and having lost all patience with their children's repeated defiance, worked together to punish Meliodas and Elizabeth, this one for uniting with Meliodas and saving members of the Ten Commandments. Although Meliodas and Elizabeth tried to fight them, they could do nothing against their god-like parents and were effortlessly overwhelmed and killed. During the battle, the Demon King cursed Elizabeth with perpetual reincarnation, which forces her to live short lives as a human, meet and fall in love with Meliodas, and inevitably die in front of him (though there were cases in which Elizabeth simply died of old age).[1]

The first reincarnation shown after her death in the battle was as a member of the human savage clan. Since the war, Elizabeth has reincarnated 107 times, to her current life Elizabeth Liones.

Prelude to the Holy War arcEdit

Elizabeth briefly appears in the dreams of a comatose Estarossa, where he reminisced about an instance where Elizabeth appeared asking him if he had gotten into a fight with his older brother.

As the daughter of the Supreme Deity, Elizabeth is a powerful goddess who is quite confident in her abilities, stating that she would fight five of the Ten Commandments herself if they had any intentions of hurting Meliodas.[2] The mere release of her magic power was able to push back the Indura forms of Derieri and Monspeet, while causing Gloxinia, Drole and Ludociel to struggle against it from a distance. She proves her might against two members of the Ten Commandments on their Indura forms by rendering them unconscious for some time, with some help from Tarmiel and Sariel, something significant as three members of the Four Archangels were nearly helpless against them. Her power was even praised by the mightiest Archangel Mael, who recognized her to be as capable as Meliodas or Ludociel.

All the Goddess clan related spells utilized by Elizabeth were inherited for potential use by her reincarnations.

Retrieved from "https://nanatsu-no-taizai.fandom.com/wiki/Elizabeth_(Goddess)?oldid=138255"
Community content is available under CC-BY-SA unless otherwise noted.