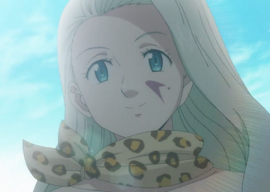 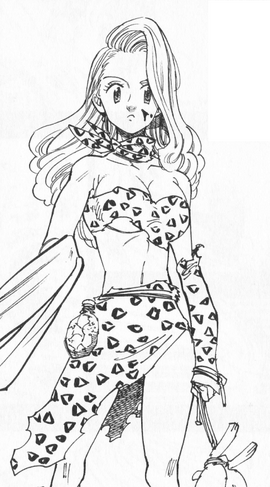 Elizabeth「エリザベス」 is a member of the Savage Tribe, and one of the 107 reincarnations of the goddess Elizabeth.[1]

She looks identical to the original Elizabeth. She wears fur clothing that resembles leopard skin with a loincloth as a skirt. She also wore it around her neck and on her right arm. Just like Elizabeth Liones, her right eye went under a transformation and the Goddess Symbol appeared in her eye. Eventually, after regaining her memories, the symbol awoke in the left eye as well.

When she first met Meliodas and he hugged her, she retaliated and punched him, showing her to be defensive. But after he got to know her she opened up to him and started to trust him more, eventually falling in love with him.

While Meliodas wandered around the war-torn Britannia, he met Elizabeth by chance.

At first meeting she did not know who he was, as she rejected his affective demonstrations. However, after she got to know him properly she took a liking to him. Meliodas would often try to tell her about her past life but she would not understand. Eventually she awoke the Goddess Symbol in her right eye and became capable of using healing powers.

Meliodas, finally convinced, told Elizabeth everything about their past, triggering Elizabeth's memories to return in fragments until she remembered everything, prompting the Goddess symbol to appear in her left eye too.

She then tells Meliodas about their curse and begged him to promise her to break it. After he agreed she explains how their parents cursed him with eternal life and her with perpetual reincarnation. She would live as a human, forgetting all her previous memories and that she would die every time, three days after she regained her old memories and that every time she would be reborn she will meet and fall in love with him, only for Meliodas to witness her die again.

After three days the curse took effect when a wooden log accidentally pierced her chest, killing her.

Due to her being the reincarnation of a Goddess her primary abilities are restoring others. It could be inferred that after regaining her memories she could also use spells her original incarnation could use.

Retrieved from "https://nanatsu-no-taizai.fandom.com/wiki/Elizabeth_(Savage_Tribe)?oldid=141423"
Community content is available under CC-BY-SA unless otherwise noted.