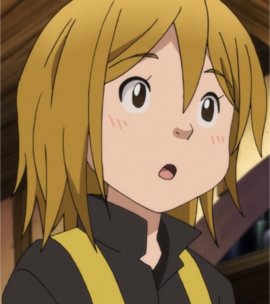 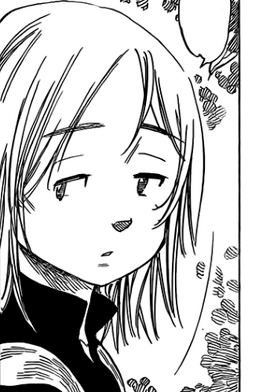 Ellen「エレン」 is a mysterious young girl who lives in the village closest to the Capital of the Dead after the Holy Knights took the rest of the villagers away.

Ellen has shoulder-length dark blonde hair and thin eyebrows. She wears a black shirt with an overall on top.

Ellen is a quiet and mysterious girl who loves her brother dearly.

Ellen's past is unknown, but her fellow villagers were taken away by the Holy Knights. She and her brother Luigi are the only ones left in the village.

Ellen is seen leaning on a wall when she suddenly collapses, just as Ban passes by. Ban quickly rushes towards her to see if she was okay, however her brother appears, thinking that Ban is harming her. Anxious, her brother unwillingly stabs Ban, only to realize afterwards that he was helping his sister. Out of the blue, King appears and stabs Ban, causing the siblings to grow terrified. In order to concentrate on the battle, Ban tells Ellen and her brother to find safety, to prevent themselves from getting harmed.

After the battle between King and Ban, the Sins bring the siblings to the Boar Hat, where Ban cooks food for everyone. Ban begins questioning about how to get to the Capital of the Dead, when Luigi tells them that King is also attempting to get there. Ellen who had remained quiet, then suddenly brings up that A priceless memory shared with the deceased will open the path to the Capital. Ban thanks the two children for the information, and the Deadly Sins continue their way to enter the Capital of the Dead.

Ellen and her brother are left behind at the village. Just as they see the group leaving, the Holy Knight Guila appears and begins asking them how to get into the Capital of the Dead. She threatens the two by choking them, until Luigi finally tells her about the location. Realizing more about the Capital of the Dead, Guila decides to free the siblings and kills herself to get there.

After the Deadly Sins return from the Capital, Ellen and her brother thanks them again for the food, before leaving and revealing that they were actually ghosts.

Ellen has no abilities or equipment as of yet.

The fate of her relatives and family is not revealed, but she evidently loves and respects her brother very much.

Retrieved from "https://nanatsu-no-taizai.fandom.com/wiki/Ellen?oldid=153095"
Community content is available under CC-BY-SA unless otherwise noted.