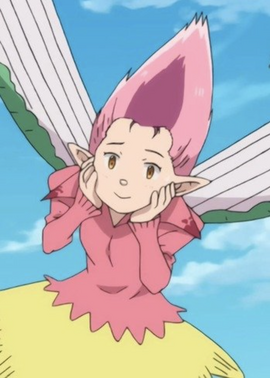 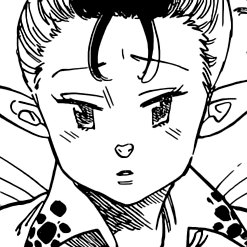 Ende「エンデ Ende」 is a fairy that lives in the Fairy King's Forest.

Ende has a firey like hairstyle but it is pink and purple. She wears a pink top with sleeves and a sunshine like tutu like skirt.

Ende seems to be a gentle, but somewhat emotional fairy. Unlike most fairies she did not really show actual hatred towards King, and was the only one to talk to him without accusing him of betrayal or even looking at him angrily, though she seems to be at least upset.

Ende was once a good friend with King, Helbram, and Elaine as they use to play games together. However, this changed when Helbram and other Fairies were kidnapped and King went out to rescue them, and never saw them again, leaving Elaine alone to protect the Fountain of Youth as the other Fairies eventually left the forest. After many years when the forest burned to the ground, Ban regrew the forest with a seed and was hailed as the new Fairy King, but Ende remained unsure.

After many years, Ende was playing with her Fairies friends until she spots Ban and King returning back to the forest alongside Jericho. While Ende was sad to see King again, the other Fairies were furious at King for leaving and praised Ban for rebuilding the forest. Later, Ende explains to King how Ban became king and why the Fairies hate King so much. While the Fairies were enjoying Ban's company, the forest is eventually attacked by an Albion which cause the Fairies to run away as they hope that Ban would save them. However, Ende and the other Fairies were in shock to see King risking his life to save them, which led them to gain the courage to fight back and beg King to leave the area to save himself, which King refused and used, True Chastiefol to slay the giant, but badly injuring himself.

She seems to have a decent relationship with the rest of the fairy clan, as she has been seen flying around with other fairies, when Ban, King and Jericho arrived.

It is currently unknown how exactly she views Ban, as they never really interacted. However, there were hints that she doesn't consider him the fairy king, like referring to him as 'that person' instead of lord Ban or fairy king like most other fairies do, when she explained that he came back every few years.

Little about her relationship with King is currently known. They were apparently good friends in the past, as King remembers her and her name even after not seeing her in over 700 years, and was very happy to see her and the other fairies. It is worth mentioning that she is the only fairy so far that didn't either attack, lash out or even glare at King. Instead she has calmly talked to him, with a look of worry and/or sadness. When the Albion attacked the new Fairy King's forest, she like the other fairies, was shocked when King started fighting the creature despite apparently not having a chance to win but still keeping on. Ende though, seems to be the most touched by that, as she is seen crying and at a loss for words.

Retrieved from "https://nanatsu-no-taizai.fandom.com/wiki/Ende?oldid=148326"
Community content is available under CC-BY-SA unless otherwise noted.