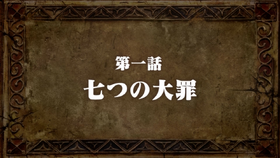 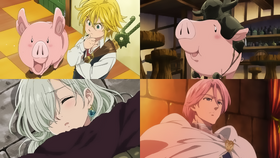 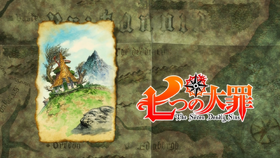 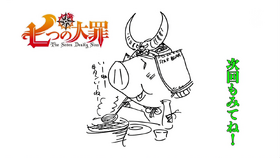 The third princess of the Kingdom of Liones, Elizabeth, finds Meliodas, who is the owner of the Boar Hat bar and is also one of the Seven Deadly Sins. With her identity revealed, she is pursued by Twigo whom Meliodas easily defeats. The princess joins him on his journey to find the other Deadly Sins in order to defeat the Holy Knights, who have orchestrated a coup d'état and have overthrown the king.

Outside of Liones, a young squire walks through a desecrated residential area with an older knight. They stop at the site of a bloody battle, where dozens of Holy Knights lay dead. The knight explains that all of them were killed in the blink of an eye by only seven people.

Ten years later, near Kaynes Village, a figure clad in full suit of armor shambles across the fields. Nearby, at the Boar Hat bar, many patrons visit for drinks and food, though the bar’s owner says that they have a reputation for good booze and terrible food.

A man bursts into the bar and states that he saw the infamous Rust Knight. One bar patron says that the Rust Knight is just a made-up story to scare kids into behaving. He points out the wanted posters and explains that the Seven Deadly Sins had massacred Holy Knights, including the Grand Master, 10 years ago.

Loud creaking noises stop conversations in the bar, and Hawk, a talking pig, says he can smell rust. The door swings open, and a large armored figure shambles in, causing the patrons to evacuate. The figure falls backward, revealing an unconscious young woman. The owner brings her back to his room and “checks” to make sure that she’s a woman, much to the frustration of Hawk. When she wakes up, she asks what happened and where she is. He replies that she suddenly passed out in his bar.

He makes food for her, and she agrees that the food is awful, but still says it’s delicious as she begins to cry. She explains that she’s looking for the Sins. Outside, Alioni and his group of knights demand entry so that they can arrest the Rust Knight. Allioini recounts his experiences at the uprising 10 years ago, telling them not to underestimate the Sins. His team doesn’t believe him.

The knights shout at the bar again for the Rust Knight to come out, and Hawk comes over dressed up with pieces of armor. Alioni shouts at the owner, frustrated with the turn of events while the woman tries to sneak out of the bar. One of the knights notices her, and Alioni calls for them to inform Twigo.

The knights chase her through the forest, and Alioni muses that he can finally be an apprentice Holy Knight if he catches her. However, Hawk bolts in and knocks out all of them.

Sir Twigo cuts the ground below them, causing them to fall down the cliff. He tells the rest of the knights to write up a report about the casualties, but the owner lands safely in front of them with Hawk, Alioni, and the woman in tow. Twigo recognizes the woman’s earring as a mark of the royal family, concluding that she is Elizabeth, the third princess of Liones.

Elizabeth, Hawk, and the owner flee into the forest. Hoping to “accidentally” kill her, Twigo cuts through the entire forest, causing hundreds of trees to fall. The owner shields her from the impact with his body. However, Elizabeth then walks toward Twigo to give herself up in the hopes that a kind stranger would not be killed because of her. After protecting her again, he introduces himself as Meliodas.

Alioni wakes up looking for Meliodas, but a knight reassures him that Twigo can handle himself. Yet Alioni says they should be worried as he had recognized Meliodas’ dragon tattoo.

Twigo attacks Meliodas from behind, but instead, Twigo is the one who gets hurt. As Meliodas stands, Twigo recognizes him and asks how he looks exactly the same. Twigo attacks again but does no damage. Meliodas counterattacks with his broken blade and causes the area to explode in a cloud of smoke and Twigo to shoot off into the distance. He smirks, reintroducing himself as the Sin of Wrath, Meliodas.

After resheathing his sword, Meliodas explains to Elizabeth that he runs the bar to gather intel. He asks if she’ll come with them, which she immediately agrees to. Twigo, surrounded by knights in a crater, tells them to call for reinforcements, but Hawk’s mom emerges to pick up Meliodas and Elizabeth.

At Fort Solgales, a Holy Knight expresses his hopes that Twigo’s report on seeing one of the Seven Deadly Sins is real this time.

Retrieved from "https://nanatsu-no-taizai.fandom.com/wiki/Episode_1?oldid=133103"
Community content is available under CC-BY-SA unless otherwise noted.