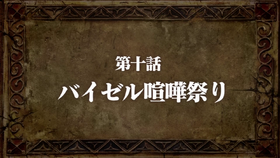 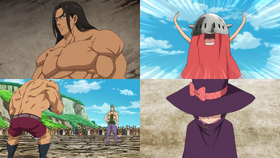 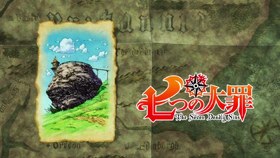 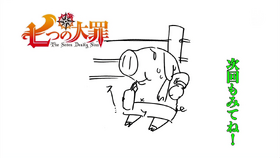 The fighting festival starts with an elimination round that results in eight contestants left standing. The first round of the quarterfinals is Holy Knight Griamore versus "Matrona", in which Matrona manages to break Griamore's barrier and send him flying. Matrona is revealed to be a shrunken Diane wearing Elizabeth's clothing.

Diane and Elizabeth previously encountered a giant mushroom called a Chicken-Matango that shrunk them both when it felt threatened. The second round is Holy Knight Howzer versus three-time champion Taizoo, in which the former defeats the latter with one punch. The third round is King versus Cain Barzad, a drunken old man.

Since King is nearly powerless without his weapon, Cain easily knocks King out of the ring. The final round is Meliodas versus Ban, and Howzer learns from Griamore that the two are members of the Seven Deadly Sins.

Elizabeth and Diane are out in the forest outside of Vaizel searching for anything that might be edible. Elizabeth stumbles upon a pile of mushrooms before a shadow looms over her. Diane hears Elizabeth's cry and comes running over to find a frightened Elizabeth and a large, purple mushroom creature. She taps it on the head and it squirts out pink smoke that engulfs them.

Griamore and Matrona steps into the ring but Matrona is asked to remove her cloak to make sure she is not hiding any weapons. Underneath, Matrona is wearing Elizabeth's clothing raising Meliodas' suspicions. Griamore and Matrona fight and Matrona ends up being the victor by sending Griamore flying. Matrona ends up being revealed to be actually Diane and King asks how she ended up that size. She tells him about the mushroom they encountered. King says that they must have met a Chicken-Matango and it shrunk them because it felt threatened.

Meanwhile, Howzer and Taizoo go at it but Howzer uses his special ability and sends up flying out of the ring.

Veronica goes to find Griamore, followed by Howzer. He asks the two what they are doing out here and learns that they are looking for Elizabeth.

King goes up against Cain Barzad and looses after having been pushed out of the ring.

The final round is Meliodas against Ban. Howzer learns from Griamore and Veronica that King, Ban, and Meliodas are part of the Seven Deadly Sins.

Retrieved from "https://nanatsu-no-taizai.fandom.com/wiki/Episode_10?oldid=149474"
Community content is available under CC-BY-SA unless otherwise noted.