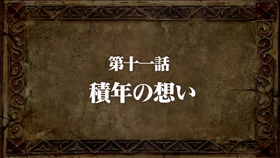 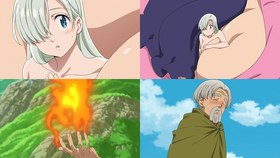 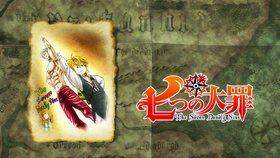 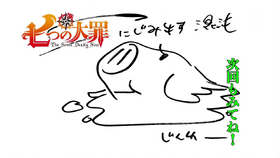 Pent-up Feelings「積年の想い Sekinen no Omoi」 is the 11th episode of The Seven Deadly Sins anime series.

Meliodas and Ban engage in a fierce fight that shakes the ground beneath them, equally matched due to their incredible strength and agility. However, Meliodas grabs onto Ban's wrist and blasts him out of the ring, thereby winning the round.

The first round of the semifinals is Diane versus Howzer, in which Howzer goes all out with his windy punches, but Diane does a body slam on Howzer and wins the round. The second round is Cain versus Meliodas, in which Cain believes that Meliodas betrayed the kingdom in the past.

When Meliodas says that he did not betray the kingdom, Cain trusts Meliodas and forfeits the round. The round of the finals is Diane versus Meliodas, while Guila and Jericho are making their way towards Vaizel.

Meliodas and Ban fight each other. They go head to head and it looks like Meliodas is going to win but Ban takes all his powers. Ban goes to deliver the finishing blow but Meliodas grabs and crushes his wrist and blasts him out of the ring. King and Diane saw how it happened but are concerned with the look of Meliodas face when he did it.

Next up is Diane against Howzer in the first match of the semi-finals. Diane runs into the ring but first hands over tiny Elizabeth to Meliodas. Veronica and Griamore continue their search for Elizabeth. Diane tries to avoid Howzer's tornado attack because she does not want to destroy Elizabeth's clothes. Howzer sends a full-on cyclone but Diane beats him by turning into heavy metal.

Meliodas goes up against Cain. Cain reveals that he knew Meliodas in the past and is from Danafor, a kingdom that Meliodas allegedly destroyed. It is where Elizabeth was born. Cain asks him what possessed him to kill Liz, the woman he loved. Meliodas says that he tried to protect them and that this time he is not going to let that happen again. Cain asks him if he can trust Meliodas and Meliodas says that he did not betray the kingdom. Cain forfeits the round leaving Meliodas as the winner of the round.

The final round is Meliodas against Diane. Meliodas asks if they should half-ass it since if either one wins they will still get the treasure. But then some women from the sidelines catcall Meliodas upsetting Diane who calls Meliodas a womanizer.

Meanwhile, Guila, Jericho and Marmas are on their way to Vaizel where Jericho wants to use her new power.

Retrieved from "https://nanatsu-no-taizai.fandom.com/wiki/Episode_11?oldid=125504"
Community content is available under CC-BY-SA unless otherwise noted.