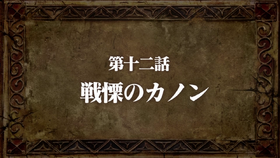 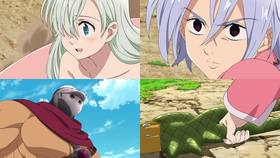 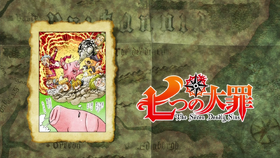 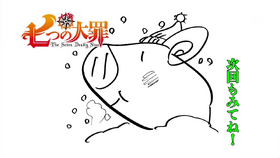 Bloodcurdling Cannon「戦慄のカノン Senritsu no Kanon」 is the 12th episode of The Seven Deadly Sins anime series.

Guila and Jericho interrupt the tournament and cause terror upon the merchant town. King subdues Guila and Jericho after Meliodas and Ban are defeated by them, but King is later overwhelmed by Holy Knight Helbram, who was disguised as tournament referee Love Helm.

Meanwhile, Elizabeth returns to her normal size and stumbles upon her elder sister Veronica Liones, who scolds Elizabeth for being involved with Meliodas. Veronica then traps Meliodas inside Goddess Amber, a stone specifically made to seal demonic beings.

Elizabeth runs away with Meliodas's sword and Goddess Amber, while Griamore temporarily restrains Guila and Jericho. Veronica catches up to Elizabeth and shields her from an explosion made by Guila, which causes Veronica to pass away. When Elizabeth calls out for Meliodas, he emerges from within Goddess Amber with a darker side to him.

Diane relentlessly punches Meliodas, who tries to convince her that he does not know who those women are. They continue to fight but suddenly freeze. Meliodas tells the crowd that Vaizel is theirs and that they have one minute to clear out. The crowd does not believe them at first but then disperses once Guila, Jericho and Marmas arrive.

Jericho attacks Ban severely injuring him. Ban is surprised that his cuts are not healing. Meliodas goes up against Guila but is taken out by her Chain Reaction technique. King finds Ban and Meliodas unconscious and is attacked by Guila. He survives the attack and defeats both women. King tells Hawk to take care of Ban and Meliodas while he interrogates Guila and Jericho.

Diane is upset when she learns that Gideon is missing. Howzer comes to fight her for past crimes but first, she looks after an old man. Diane is then attacked by Marmas and sent falling into a ravine. Hawk gets Elizabeth, Ban, and Meliodas to safety. While praying over the two unconscious Deadly Sins, Elizabeth returns to normal size just as Veronica and Griamore walk by. Veronica gives Elizabeth her jacket to wear and proceeds to scold her for running with the Deadly sins. Veronica tries to take Elizabeth away but Meliodas stops them.

Veronica pulls out Goddess Amber and activates it causing Meliodas to be sucked inside. Elizabeth snatches the jewel and Meliodas' sword and tells Veronica to bring him back, but she doe not know how to do that. Griamore captures Elizabeth in a shell but Ban tells him he will kill Veronica if he does not let Elizabeth go. King continues to fight Guila and Jericho but Love Helm saves them revealing himself to be Helbram. Helbram and King fight against each other although it looks like Helbram has the upper hand.

Ban gets taken out by Jericho and Veronica is released from his clutches. Guila and Jericho tell Griamore to release Elizabeth into their care. Veronica says no and while they are distracted Elizabeth gets up and runs away. Veronica runs after her and shields her from an explosion made by Guila. This causes some fatal injuries, and she dies in Elizabeth's arms. Guila and Jericho are released from Griamore's shield and come to retrieve Elizabeth once more. Elizabeth is crying over Veronica's body for Meliodas but Guila says he can not hear her.

Suddenly, the Goddess Amber shatters letting Meliodas out, accompanied by a burst of dark energy.

Retrieved from "https://nanatsu-no-taizai.fandom.com/wiki/Episode_12?oldid=114349"
Community content is available under CC-BY-SA unless otherwise noted.