The Angel of Destruction 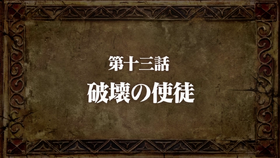 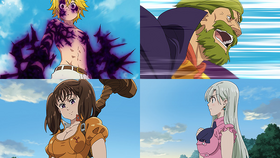 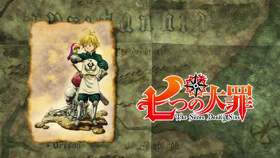 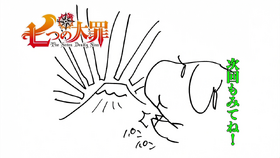 The Angel of Destruction「破壊の使徒 Hakai no Shito」 is the 13th episode of The Seven Deadly Sins anime series.

With his true power finally shown, Meliodas clashes with Helbram, who takes note on how Meliodas hones his dark abilities. After managing to defeat Meliodas, Helbram steals Meliodas's sword.

Ban takes Elizabeth, Hawk and King to safety, while Diane returns to her normal size and wields Gideon with attacks that crumble the earth, forcing Helbram to retreat with Guila and Jericho in tow.

Elizabeth embraces Meliodas after he is rescued by Diane, later lamenting the death of Veronica. Ban and King express their motives behind taking back the kingdom. With his sword now stolen, Meliodas vows to end the ongoing war once and for all.

Meliodas attacks Guila and cuts off her hand to retrieve his sword. He sends another wave of magic towards her that knocks Guila out. Jericho saves her by performing a Super Recovery Spell. Guila wakes up with her hand reattached and says that Meliodas is giving off disturbing magical energy.

Ban asks Meliodas if it's really him but gets cut in half by Meliodas. Elizabeth and Hawk huddle together as Elizabeth wonders if that's really their Meliodas. Meliodas appears before her and sniffs Elizabeth before flying away. He goes to Helbram and proceeds to fight him. Helbram is just toying with Meliodas trying to see the depth of Meliodas's new power. He uses his Hunter Wisps to take him out and begins to jot down notes of what he's seen.

Howzer stares into the chasm, upset that Marmas had cast her in there. Suddenly, a huge pig comes walking up with a house on it's back and deposits Diane's clothes into the opening. Helbram and Meliodas continue to fight and it looks like Meliodas finally has the upper hand. However, Hendrickson lends Helbram some of his power and Helbram is able to defeat Meliodas.

Ban grabs King and Elizabeth and runs away to get them to safety with Hawk following. Diane shows up and saves Meliodas from Helbram before he can take Meliodas away. Diane asks Helbram if it was him who hurt Meliodas and when he doesn't answer she uses her Mother Earth Catastrophe technique to disrupt the ground. Helbram manages to get away with Guila and Jericho. That is until Diane's attack rips holes into their flying manta rays. The link between Helbram and Hendrickson is severed, leaving them to wonder if he died.

Diane returns to the group and shows them Meliodas. Ban punches him as payback and Elizabeth hugs him asking him to not do that again. Griamore, who is still holding Veronica, uses his shield to burst through the rubble. Elizabeth asks him to bury her near the lake that they used to play at and vows to stop the Holy Knights. Meliodas realizes that his sword has been stolen.

Nearby, Helbram has managed to get Guila and Jericho to safety. He is happy because he stole Meliodas's sword, which is one of the keys to reviving the Demon Clan. Howzer learns that Veronica and Griamore are dead although he can't believe it. He's also told that the delicate balance between the Hendrickson and Dreyfus factions is starting to crumble.

Elizabeth vows to Veronica that things will be different. Diane tells her that she'll have help from Meliodas and the other Seven Deadly Sins. Nearby, King and Ban fight each other for practice so that they can take back the kingdom. Ban says that he'll save the kingdom then take the Horn of Cernunnos as payment. He wants to call on the goddesses to bring back Elaine.

Meliodas promises to end the war that's been going on for over 3,000 years.

Retrieved from "https://nanatsu-no-taizai.fandom.com/wiki/Episode_13?oldid=140578"
Community content is available under CC-BY-SA unless otherwise noted.