A Reader of Books 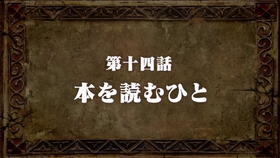 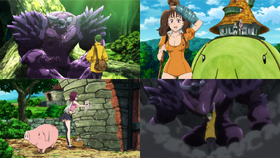 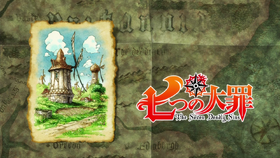 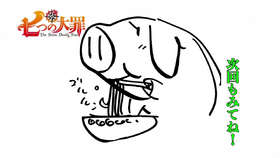 A Reader of Books「本を読むひと Hon wo Yomu Hito」 is the 14th episode of The Seven Deadly Sins anime series.

News about several sightings of an Armor Giant somewhere in Ordan Forest reaches Helbram, who quickly sends Dawn Roar, an elite group of Holy Knights, to search for the Armor Giant. Meanwhile, Guila visits her younger brother Zeal, and she later kills three thugs who bullied him for his spare change.

Meliodas and his friends split up in the nearby village. Elizabeth and Hawk encounter a boy named Alan, who is looking for some glue to repair armor. Upon hearing the low growls that echo in the forest, Meliodas, Ban and King find the Armor Giant being surrounded by Dawn Roar, but Meliodas, Ban and King are no match against Dawn Roar.

Just as it seems that the Armor Giant is about to be slain, Alan intercepts and reveals himself as Gowther, the Goat's Sin of Lust.

An Armor Giant roams the forest with Alan. They take shelter in a cave when it starts to rain. A knight brings news to Guila, Jericho, and Helbram about sightings of the Armor Giant in the Ordan Forest. Helbram sends Dawn Roar to destroy the Armor Giant. Jericho is upset that Helbram didn't send her and Guila but Guila says that they should use this time to rest up for the next battle. Guila goes to visit her brother, Zeal, who got mugged on his way home with his monthly salary. After she puts him to bed, Guila goes after the thugs who harassed her brother and kills them.

Meanwhile, the gang arrives and sets up shop. Meliodas sends Elizabeth to the village to get some herbs while he and the guys do some hunting. Diane has a rest. Holy Knights arrive while Elizabeth and Hawk are in the village. They quickly hide behind a wall of rocks but are found by Alan who asks if they're playing hide and seek too. Ban and Meliodas make hunting a contest. Meliodas says that he's won because he captured a Sword Wolf although Ban disagrees with this. They ask King what he caught by find him sleeping on his pillow. They tell him to go find something else to bring back. He protests at first but then Ban mentions Diane and King decides to do it. Just then they hear a loud growl echo throughout the forest. Meliodas says that they should investigate where that sound came from.

Alan tells Hawk and Elizabeth that he's looking for glue to fix armor since the Armor Giant has a gaping hole in his chest. They ask him if he's a friend of his but Alan doesn't know how to answer. Meliodas, Ban, and King find a field of the fallen vanguard. One of them tells Meliodas that Dawn Roar is going after the Armor Giant. Meliodas theorizes that the Armor Giant is Gowther. They make it to the Armor Giant before Dawn Roar manages to kill him. Just as they're about to fight Alan arrives apologizing to the Armor Giant about not finding any glue. Then all hell breaks loose as the two groups go against each other. One fires a deadly arrow at the Armor Giant but Alan catches it and reveals himself to be Gowther, the Goat sin of Lust.

Retrieved from "https://nanatsu-no-taizai.fandom.com/wiki/Episode_14?oldid=144317"
Community content is available under CC-BY-SA unless otherwise noted.