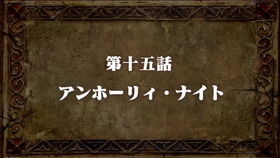 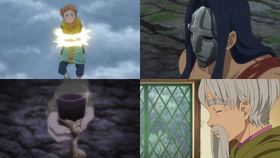 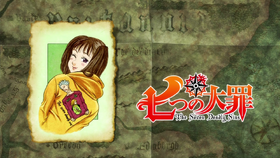 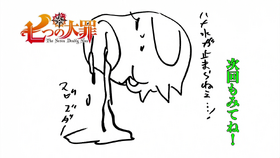 Gowther gives the head of the Armor Giant to the members of Dawn Roar in order to convince them to withdraw from battle. However, the demon breaks through the armor and attacks Meliodas, Ban, King and Gowther. Meliodas lowers his guard upon noticing a Holy Knight merged into the demon's chest, but Gowther uses his Sacred Treasure, the Twin Bow Herritt, to stop the demon.

Meanwhile, Cain visits Elizabeth in the Boar Hat, where he tells her the story of Liz, a knight from an enemy kingdom who became Meliodas's past lover after he saved her from being sentenced to death. Ban gouges out the heart of the Holy Knight, recognized as Guila's father Dale, yet the demon still remains alive.

Elizabeth rushes to Meliodas and gives him Liz's sword left behind, which allows him to destroy the demon. It is realized that Dale was one of Hendrickson's failed demon experiments.

Elsewhere, Dawn Roar contemplates why Helbram wanted the Armor Giant dead so badly and why he didn't send the New Generation to take care of it. Gowther tells Meliodas and the gang that he had the Armor Giant wear his armor to seal away the Holy Knight's magic. However, once the armor started to break the seal was broken. The Armor Giant attacks them and they try to hold him off. Meliodas goes to deliver the killing blow but the trapped Holy Knight pleads with him not to. Ban gets upset that Meliodas won't kill him and asks Gowther to but he says he is incapable of killing him as well. Ban goes to do it but Meliodas stops him telling him that there is still a part of the Armor Giant that's human.

Meanwhile, Elizabeth and Diane wait for Meliodas and the deadly sins return. Cain arrives asking if the Boar Hat is open and is welcomed inside by Elizabeth, whom he mistakes for Liz. Ban uses his whip and pulls out the Armor Giant's heart. Cain tells Elizabeth about Liz. He also tells Elizabeth why Meliodas won't carry a sword around. Cain pulls out a sword and sets it on the bar. He says that it was a gift from Liz to Meliodas but that he accepted it on Meliodas's behalf. Meliodas is angry with Ban for killing the Armor Giant. Gowther points out that the Holy Knight is stuck in the illusion he created for him. We learn that he's actually Dale, Guila and Zeal's long-lost father. Elizabeth takes the sword and runs off in search of Meliodas.

Despite what Ban did, the Armor Giant is still alive and has transformed into a demon. Meliodas still doesn't want to fight him but Ban and King do. Elizabeth arrives with the sword and throws it to Meliodas. He recognizes it as the one that Liz was tying to give him. He catches it and uses it to destroy the demon. The group leaves to head back to the Boar Hat but Gowther stays behind and remembers when he first met Dale.

Elizabeth meets up with the group and Meliodas thanks her for the sword.

Retrieved from "https://nanatsu-no-taizai.fandom.com/wiki/Episode_15?oldid=149479"
Community content is available under CC-BY-SA unless otherwise noted.